The word “Hide” is not in Lindsay Watson’s dictionary but “Attack” is on the first page of the CI Top-ranked domestic A1 rider from Powerhouse Sport!!

The first race of the afternoon session of the Canal Crit was the A4 race including ladies…Felt sorry for the promoting club SLCC that only 2 handfuls signed on, and one brave junior girl ( Ellie Kelso TC Racing) Hereby an urgent request to the A4 section of the sport…please enter such races as the low entries have forced already many promoters to cancel A 4 races all over the Irish Cycling fraternity. Due to low points needed (13) to move to the A3 cat the barrel is getting empty to quick, and not many new riders to refill the pool. Whoever thought of this point system need to re-think their decision, and research why such low nrs occur and act accordingly ( personal view). The organisers yesterday decided that the slot was there and honoured all entries with a race! In road races, this is not possible as there are other things to consider such as extra comm’s, lead car’s, prize money etc…and fair play to SLCC to go ahead with the race as the town centre was closed anyhow. The race himself had an early break of 3 riders who kept away, one dropped off in the last few laps and it became a sprint for the 2 up front, won by Davoren Fallon (DCU CC) beating local lad Stephen McCay. Ellie Kelso used the race as a TT as she hadn’t to worry by anyone and kept doing her laps to get on the podium, just like her younger brother Neil was earlier in the morning. Well done to you all

The main race of the day and the last one too had also a very low and disappointing number. Saying that, the ones who showed up give the best they got…big hitters like Adam Ward (Bioracer-DHL-Fr services), Lindsay Watson (Powerhouse Sport) Darragh McCarter (Donegal Bay) and Mitchell Mc Laughlin (Four Masters) done the job with fierce racing. Lindsay and Adam got away very early in the race and it was a chasing job for the others who eventually saw Mitchell and Darragh leaving the bunch behind them and after a bit of slack up front got to the leaders in sight. They managed to make a connection and the sprint to the line was on, Lindsay just got the better of Adam in a close finish, Darragh a respectable 3rd, and in my view the man of the day was Mitchell, this lad turn up at every race in the country nearly, travels miles and miles with his team Four Masters, works in the race and attacks at every opportunity…he had to be happy with his 4th place. If there has been a prize for combat activity on the day he would be my choice. Michael Mc Glynn (Omagh Wheelers) won the sprint of the bunch in 5th. 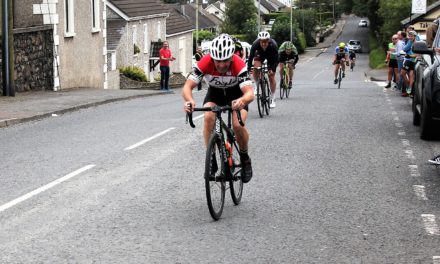