The Elite ladies race at Drewstown House today was dominated from start to finish by the young guns with the first 3 riders all under the age of 18. From the off Annie Roche, Scott Donnybrook having her first race at this level led the field closely followed by last weeks winner Caoimhe May, Scott Orwell, Lucy O’Donnell Verge Pi Cycles and Stephanie Roche also Scott Donnybrook. By the end of lap 1 of this 5 lap race, these 4 had built a lead of 30secs over the rest of the field led by Asia Bula, Scott Donnybrook. On lap 2 O’Donnell went to the front and started to push the pace closely followed by Annie Roche and Caoimhe May with Stephanie Roche unable to maintain the pace of the first 3. At the start of lap 3, O’Donnell had managed to distance her 2 companions and had built herself a lead of around 20secs over Annie Roche who in turn had a small margin of 10secs on Caoimhe May. Lucy maintained her 20sec lead on lap 4 with Annie Roche never giving up the chase. Caoimhe had dropped back a bit at this stage to trail Roche by 20secs herself. On the last lap, Annie Roche kept Lucy O’Donnel honest and there was never more than 30secs between these riders. Caoimhe May had a mechanical near the end of the final lap but still managed to run over the line to get 3rd and keep her lead in the series. Stephanie Roche rode a fine race to hold off the field to finish 4th with Asia Bula coming home 5th and 1st ladies M40 making it a good day for Scott Donnybrook with 3 riders in the first 5. (report Sean Rowe)

Not the Stephen but the Sean Nolan show!!

On a muddy, sticky but fast circuit today in Drewstown House, Co. Meath, Oldcastle CC ran round 2 of their cross series which also doubled as round 2 of the newly inaugurated Leinster Cyclocross League. From the gun, it was Sean Nolan, Navan Road Club who took the initiative and quickly built himself a margin over the rest of the field which he would never relinquish. By the end of lap 1 of the 8 lap race Sean had a cushion of 20secs over the rest of the riders led by Tim O’Regan, WORC who himself had a tidy advantage over third-place rider Kevin Keane, St. Tiernans who was trying to shake off the attentions of the Team WORC rider Niall Somers and Scott Orwells Eoin Ahern. Over each of the next 3 laps Sean built his advantage through 50secs, then 1:10secs to 1:30secs by the end of lap 4. Tim O’Regan kept up a valiant chase and held the lead at 1:30 through lap 5 and 6 but couldn’t close the gap. In the end, it nearly cost him 2nd place as a rapidly closing duo of Kevin Keane and Eoin Ahern, who were having their own battle for 3rd, meant Tim’s runner up spot wasn’t guaranteed. In the end, Sean came home over 2mins clear to complete his maiden victory at this level. Tim O’Regan had enough in the tank to fight off the attentions of the chasing duo to take the runner up spot comfortably enough with Kevin Keane finishing 3rd and first M40 and Eoin Ahern having to settle for 4th. The evergreen John Doris, Epic was the first M50 and first-year junior David McCarthy, Verge took the junior race which was run with the A race. (report Sean Rowe)

The B- race produced a Kilcullen winner

This weekend we see 2 Grand Prix’s on Ulsters roads..The Hilltown GP in Co-Down (A1-A2-A3-A4) and the Emyvale GP in Monaghan (Senior, Youth, Masters and Women’s Racing) 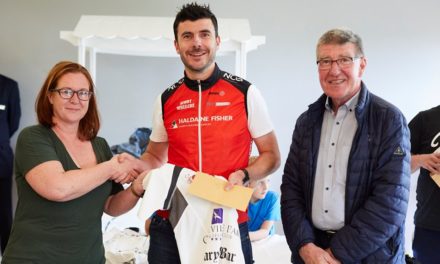 Ian Inglis wins Ards CC’s traditional Christmas TT (10 miles) for the 6th time in a row at the Ards Peninsula!!