Lara Gillespie out sprinted Ireland teammate Maeve Gallagher to take a fine win on the final stage of the opening round of the Witham Grand Prix – but it was Anna Shackley who took the overall victory in the opening round of the 2019 British Cycling Junior Women’s Road Series. (Report courtesy of Andy Whitehouse &All Photos 5311 Media GB with thanks)

Scotland’s Anna Shackley took the overall victory by three seconds from Gallagher after the trio went on the attack with just over half a lap completed. After an eventful opening day that saw Storey Racing’s Amy Monkhouse lead the general classification by a slender second – and only six seconds splitting the top five – the second day promised plenty of twists and turns. Maddie Wadsworth (Team OnForm) took the early initiative out of the neutral section but it would be short-lived, with teammate Kate Wootton taking the first sprint points across the line, Abi Smith (RFDA) picking up a point to all-but secure the points jersey. With the race settling, on the first of three main laps, Caitlin Peters (Storey Racing) attacked the field but it was the Irish pair of Gallagher and Gillespie that jumped over the top to head up the lead. And with Shackley joining the pair, the trio was set for the remainder of the race, the gap to the main field soon climbing to some 40 seconds. By the second lap, Shackley took the virtual race lead from Monkhouse and once again, through and out of Witham, the leaders all but cemented the top-three result, with no real chase from the main field allowing the gap to move out to over 50 seconds. Coming into the final lap, the bunch looked to be organising themselves to chase the leaders down and the gap started to fall to just over 30 seconds but Shackley wasn’t going to let the day’s efforts be nullified. She went to the front and put a hard turn, and the gap started to go out again to well over a minute. The cat and mouse tactics could have allowed the gap to tumble at the foot of the final drag up to the finish, but the trio, knowing the line was in sight, went for a long sprint. Gillespie out-paced Gallagher for the win whilst Shackley had to be content with third on the stage but knowing she had done enough to secure the overall victory. 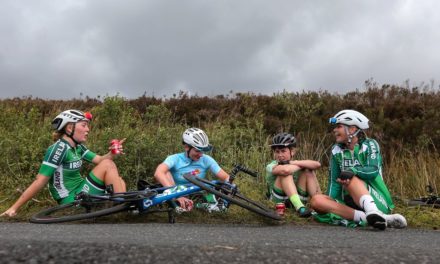 As predicted Josie Knight takes a hattrick of wins and a Yankee on the cards for Josie before the end of the race on Sunday maybe?? (Stage 4 Kilkenny- The Cut)

The 2021 Haldane Fisher North Down GP (Sunday 22nd August) Primes, KOH prizes, and generous overall prizes for a total of £1500 !! The entries for tomorrow…

Sammy B is the fastest again…his 6th win of the 2021 season is a fact..this time in Portugal in the 1 st stage of the Volta Algarve