Here are the results of the Peter Bidwell Memorial, promoted by Drogheda Wheelers CC. A very busy day for the club with 7 races earlier in the day over the opening two stages of Rás na nÓg and another 7 tomorrow with the last stage of Rás na nÓg and The Coombes Connor Memorial.
The Peter Bidwell Memorial remembers the dearly missed former chairman of our club and a founding figure of Rás na nÓg back in 2007. The competitors set off for 8 laps of the tough ‘Donore Circuit’ compromising 51km. Some early breaks looked promising but as the A1’s and A2’s caught up with the earlier groups, the race started to split. Out on the final lap, Sean Landers, managed to open a small gap from the bunch, holding it to the line with 10 seconds to spare over Paul O’Reilly with Lander’s teammate, Conor McKenna in third. 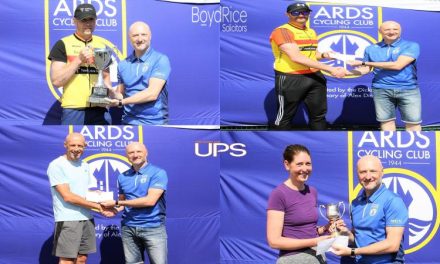 Marcus Christie (Banbridge CC) retains the Shaw Cup in Newtownards!! The 2022 Champ of Champions yesterday (Sun 31st July) promoted by Ards CC, sees the recordholder demolishing the field!! The mind boggles why he is not selected for the Common Wealth games!! Hazel Smyth (U/A Ulster) takes the ladies prize!

*Ready to take on the world* 9 Irish athletes to compete in UCI Para-Cycling Road World Championships in Portugal (Wed 9th – Sun 13th June) The Belgian Project wishes them the best of luck and medals to bring home!!