I dedicate this award to all the volunteers & guest parents, sponsors, donators and guest photographers of the Belgian Project and my wife Maggie…so chuffed for all of us!

Here the announcement from the CI web site (Voting can be done each month on https://www.surveymonkey.com/r/8JJKGJ8

Conor had an excellent month on the road in March. He won two races including the first round of the National Series at the Des Hanlon hosted by Carlow Road Club along with Rás Luimní. After two rounds he currently tops the National Series general classification having won the series last year. “It’s really nice to be acknowledged for winning the Des Hanlon, it’s a massive race to win in Ireland and I am delighted that I was able to take the win this year,” he said. “I am happy how the season has started, the form seems good. Hopefully, I can keep up the good start for another few weeks. I am not sure of my plans for the rest of the season since the Rás is gone which is a major disappointment. I’ll try to defend the national series, try to win as many races as possible and hopefully do some racing abroad” he concluded.

Grace was nominated for the award based on her win in the opening round of the women’s national series at the Des Hanlon. In a field full of quality riders she won a bunch sprint to take the win in Carlow and get her season off to a great start. “I am honoured to receive the award…winning the Des Hanlon was one of my proudest sporting achievements to date” she said. “I’m very happy with how my season has started. Having raced cyclocross during the winter I probably came into the road season fitter than previous years. I wasn’t sure if I would race both disciplines this year but now I’m back road racing I’m loving it”. “Balancing work and training can be difficult at times but having joined a new race team I am more committed and focused than I have ever been. My main goals this season will be the national series and of course the national championships in June”.

Dany has been selected for his ongoing coverage and support of the sport, particularly youth cycling. He runs the Belgian project which aims to give young Irish cycling talent the chance to race in Belgium. It also has a team of photographers who report on races through photographs, videos and interviews. As well as this Dany also provides commentary for some races to generate donations to the bursary funds for the project. “I am honoured to receive such an award, my project is now eleven years old and so long as I am healthy it will continue as it is my life’s work,” he said. “Due to my early retirement, I can dedicate all my time to the project and hopefully help many more young riders to make the step up the ladder. We are an all welcome project, no matter who you are your legs will do the talking, our website is widely viewed with separate sections to serve youth, women’s racing, off-road and track. We have average weekly views of 3,000 and growing rapidly”.

The Club of the Month Award goes to Omagh Wheelers.

The club has been nominated for this award for their successful staging of events during the year, particularly the McCann Cup which the club promoted during March. This followed on from numerous other events that the club organise including a cyclocross event during January. The club’s vice chairperson Hugh McCann said: “As a club, we are delighted to have won the club of the month award for March, it recognises the hard work our members put into delivering top quality events to benefit the greater cycling community, the CX race in January was our first attempt at hosting a CX race, the Ecclesville Demesne in Fintona was the ideal venue and the event was a major success so much so we are now hosting the Ulster CX Championships in December 2019, the Mc Cann Cup is one of our flagship events and this year we included a full program of youth races for the first time, our masters race was part of the Ulster Masters League and our womens race offered points for both the Ulster Women’s League and the Irish Women’s Commission Intermediate league. That the event was a success was due to our members and their commitment to running top quality events” We won’t be stopping here as in July we host the 10th edition of the Tour of Omagh which combines Ireland’s best A4 Stage Race and the International Tour of Omagh ladies race. The ladies race is fast growing in stature and seen as perfect preparation for Ras Na mBan in September, finally, I want to thank and congratulate all our members, this award is for them and the work they do to make Omagh Wheeler’s a great club”.

The leisure event of the month is The SRAC Atlantic Challenge

The event was based in Tralee this year with around 3,000 participants. The event offered two routes around the Dingle Peninsula, a 100km route and a 135km route. The event received excellent reviews from participants through the post-event survey. Event promoter Alan Murphy said “We are absolutely delighted to have won this award. The SRAC would like to thank everyone who helped us deliver an amazing event. We had fantastic support from Tralee and Kerry County Council, Chain Gang Cycling Club, our event management company, Garda, Red Cross, our sponsors and the 100’s of volunteers. Thank you all and we look forward to seeing you in 2020. 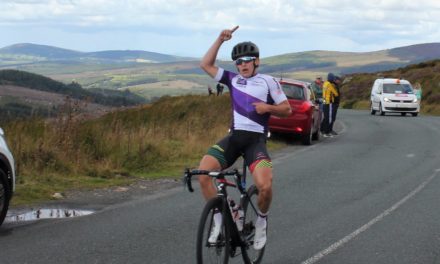 Cycling Ireland National Road Series (Rd7) The “St.Tiernan Laragh Classic 2019” A windy affair at the top of the Wicklow Gap!

*Ready to take on the world* 9 Irish athletes to compete in UCI Para-Cycling Road World Championships in Portugal (Wed 9th – Sun 13th June) The Belgian Project wishes them the best of luck and medals to bring home!!

An amazing woman in sport and life…An interview with Grace Smith (Ballymena) Fitness coach and elite women cyclist, this about her amazing weight loss of 8 stone, her goals in cycling, and being happy in her personal life with her engagement last week (Sunday 19th September)