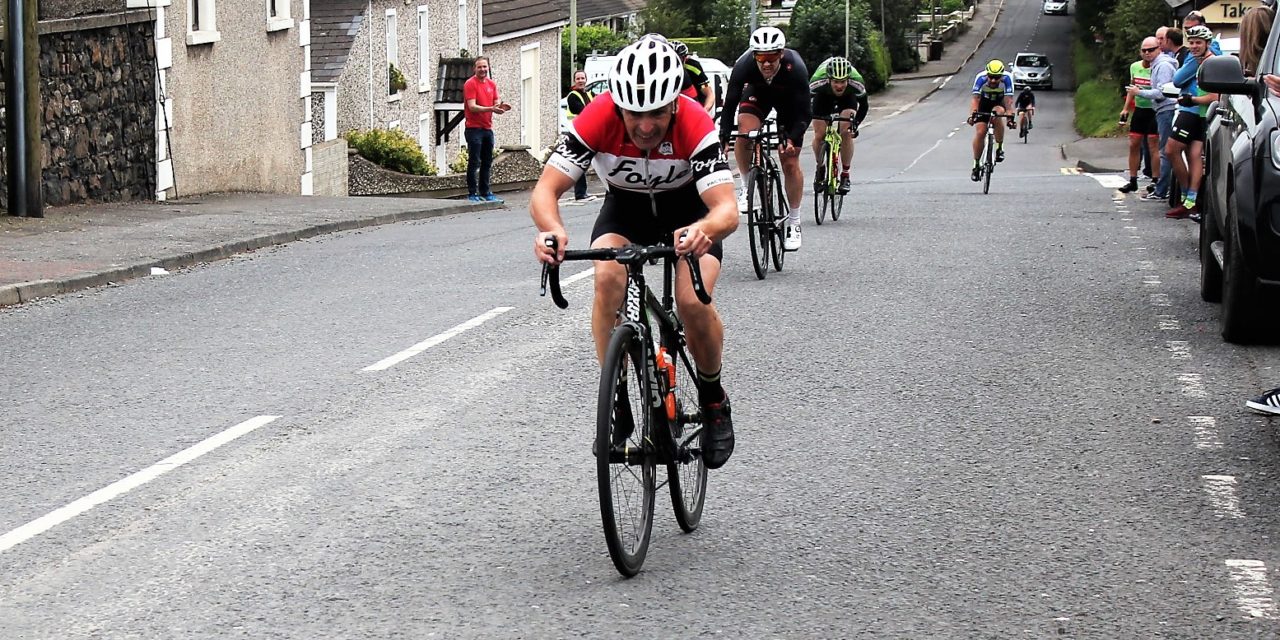 An unusual big field (80) for this time of the year in the A2-3 race of the day, and about 25 in the supporting A4 race, this situated in the sleepy village of Dunloy near Ballymoney Antrim. Promoted by Dunloy CC, with “Man of the Ras” Niall O’Hagan as race secretary, and Commissaire Martin Montague as race organiser, aided by their volunteers, add a very hard course which included the 1500 meter climb called The Brea and you knew there will be perfect racing worthy called a GP.

Robert Curry from Foyle CC took the Noel McIlfatrick Cup in some style today in a storming solo breakaway which just survived on the finish straight. Robert came out on tops in an 80 rider race on our famous Millbrae circuit.
The A4 Race was won by Dave Kane Cycles rider Colm McClean in a thrilling 2 man sprint finish after some sparkling racing. Fiona Kelly from Wicklow Velo took the Ladies prize with a performance full of courage and determination!
We pay particular tribute to the McIlfatrick family who took a prominent role on the day, Noel our friend and founder member was taken from us far too young this year and his father Frank donated the splendid trophy that Robert took home today.
We are also grateful to our marshals, drivers and helpers, the Commissaires Mario and Jim, the PSNI neighbourhood team and to Dunloy Cuchullians GAC for the kind use of their premises.
We hope that today’s excitement, drama and colour was a fitting tribute, thank you from the bottom of our hearts to all who entered and competed!
Until next year……(report Dunloy CC)

We also had the A4 supporting race, with about 25 to the start, what justified to run the race, but a down-level trend we have seen at other events, and maybe need to be looked at by the federations. The ones who entered done themselves proud as many attacks, each time rehauled and a dash to the line…we needed to wait for the results of the photo finish to declare the winner Colm McClean Northern CC (Dave Kane Cycles) beating Ladislav Cimbala from Dublin Wheelers to second with a few inches to spare, see photo of Ian Barfoot (Photo finish) below

The Vc Glendale Sportive in aid of the Cancer Fund for Children was an enormous success last Saturday (29th Feb) Thousands of pound raised by the West Belfast Club !!