“The warriors in Green” in the land of Banks, Cuckoo’s and Cheese, They will do us proud!!

Poster photo’s courtesy of Martine Verfaillie & Toby Watson, all others as indicated with thanks

It will be an uphill battle for our warriors in green, competing with the best pro cyclo crossers of the world, but a challenge to cherish. They will have a battle with countries who have enormous resources and budgets, on the other hand, having a spirit of never giving up!! You only can do your best, and that will be a certainty!! Competing at the highest level experience, this for the young ones to remember and to savour. Let’s have you Switzerland and co, team Ireland is in the house!!!

David Conroy is the current Elite Champ of Ireland for the second year in a row, has vast experience in that level of racing and bar technical mishaps should perform well…already have reached top 30 this year in the Under 23 class, done most UCI class 1 and 2 races in Europe in the last 5 months with results mostly in same lap as winner. I see him in the first half of the results appearing in the biggest field of the champs

Darren Rafferty is the Junior Champion of Ireland 2020 and was also a champ in the underage section before that, a top international road rider who combines this with cyclocross successfully as his role models in the continent. Has raced a few times already at European level and this race will be a learning curve which he could do very well in, his start position will be a hurdle as for the others in the team, but knowing Darren he will be up for the challenge!!

Roisin Lally is a very promising junior who won silver at the National CX champs in Enniscrone this year as a junior in the elite class. Has already tasted international races and will have a hunger for more. She raced in GB as an underage girl, and never missed a podium, as a junior she won all her races in that cat, bar the nationals this year, also won 3 Elite races in England as a junior….Last year she managed the highest results a young female junior ever achieved for Ireland with a 26th place. I think this is possible again or even better

Lucy O’Donnell the other junior representing Ireland…a feisty young girl that also love to combine road and cx, was the revelation of the CX Champs in 2019 with a bronze in the elite race in Cork, to repeat that again this year in Enniscrone in the elite race as a junior!! As Roisin she will compete in the first-ever World Championships for Under 18 ladies 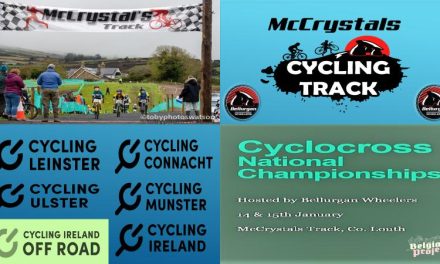