A “Feel Good” story for a change…Ex-Pro Peter Hawkins now a Maths Teacher in England offers free tuition online for students while schools are closed.

One of my first ever Belgian Project graduates (2009) Peter Hawkins lives and work now in Newcastle (England) as a secondary maths teacher combined with his personal coaching company “Upshiftvelo” Peter still races a bit in the northeast and takes cyclists out for personal coaching. He finished his long and very successful international career a few years ago. He was a regular selection for the National Irish Team and the Ulster Provincial team as pro and amateur. He won a stage in the Ras, got the yellow jersey but crashed badly and could not defend his lead with his Madison Genesis Pro Team at the time. Won classic races in Ireland and GB and was a feared rider in the kermesses in Belgium while living over there as a full-time rider. Due to many injuries and his work as a teacher, Peter decided to call it a day and concentrate on his teaching job and with success by all accounts.

As Peter always gonna have a special place in my heart due to his promotion of my project and an example for many youngsters in the sport. Due to schools closing this Friday (20th March) in Great Brittain Peter sends a message on social media to help out and share his knowledge to the ones who maybe need extra help with their studies, completely free of charge!! Peter said “Having worked with students preparing for exams this summer I feel particularly for those young people who face uncertainty at this vital time in their lives. If any of you have kids who are preparing for their GCSEs who would appreciate some help with their Maths I would be more than happy to help out, free of charge, over Skype or FaceTime. Feel free to get in touch anytime over the next few weeks if you think it might be useful” Contact Peter on https://www.facebook.com/petehawkins for more info. Such kindness and self-offering in very difficult times coming up for all of us does warm the heart!! I am so proud to call Peter a good friend, and lucky I met him as he is an inspiration to us all. Proficiat jongen, we wensen je het beste

Note: For info of personal cycling coaching that Peter provides go to https://www.upshiftvelo.co.uk 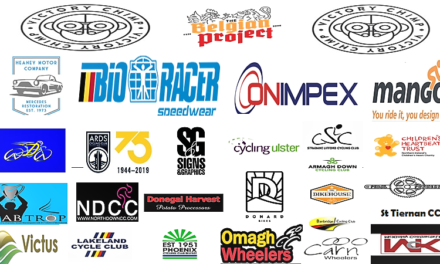 A thank you to all our sponsors and donators of 2019. Part 1 of some memories of the last 11 years

What’s on this week open racing-wise? sent the details of your event (Ranking Open events only) before each Monday Evening. This to be published here each Tuesday!!