The biggest show on earth…the Stephen Nolan Show? Nope…This time it was the VC Glendale’s “Falling Leaves Gp” held in Andersonstown, West Belfast as the last round of the Ulster CX league (Sunday 28th November 2021)

The sixth and final round of the 2021 Ulster Cyclo-cross series was held on Sunday 28 November at North Link Park in Belfast, hosted by VC Glendale. This was a new venue for the host club who normally runs their annual cyclo-cross event at Falls Park or Musgrave Park both of which were undergoing works this year. The North Link site is hidden within the housing development in Andersonstown with a play park at one end and two gravel pitches in the middle. Sign-on took place in the St. Agnes GAC building on the south side of the park. All vehicles were parked on the gravel pitches with the racing action taking place on the grass surrounding the pitches. The start/finish and pit area were on the gravel. A great set-up in such a small location. VC Glendale hosted a children’s cycling event on Saturday inviting all the local kids to come along and be coached for free. A great initiative which was well attended despite the very cold and windy conditions. On Sunday the day started off windy and cold with light rain at the start of the youth races. Sunshine appeared towards midday and the wind finally dropped for the final races of the day.

The first race of the day was for the Under 6s who had to complete 3 laps of a short loop. Well done to the 3 boys and 2 girls. All youth, up to Under 12s, received a goodie bag at the end of the race. The Under 8s course had an extended course that took them down into the bottom part of the park for an uphill climb, up over the obstacles, along the fence line, across the path between the two pitches, and back into the finish straight for 2 laps. Benjamin Cunningham (Orwell Wheelers Cycling Club) got his fourth win of the series when he finished ahead of Noah Mitchell (Square Wheels) and Elijah McClintock (Lisburn BMX Club), who had a sprint finish for second and third respectively. Elijah secured the overall league win. In the girls’ race, Ruby Millar (Square Wheels) completed her sixth win from six races which, naturally, also gave her the league win. Sophia Campbell (Phoenix CC) finished second with Fiadh Craig (VC Glendale) third.

The Under 12s course was longer with a technical climb thrown in and a second drop down to the bottom of the park. The Under 12s had 3 laps to complete. Josh McClune (Team Madigan C.C.) got his fifth win of the series which secured the overall league. Darragh Murphy (Rostrevor Mountain Bike Club) finished second with Eunan Campbell (Square Wheels) third. Aoife Craig (VC Glendale) also got her fifth win of the series, which meant the league winner as well for the Under 12 girls’ category. Clodagh Quigley (Foyle CC) finished second ahead of Aoife Kellett (Dromara Cycling Club).

After a break for practice the next races lined up with the Under 16s, Under 14s, and Women bracing the cold winds on the start line. They took on the full course with the Under 14s and 16s doing 4 laps and the women completing 5 laps.

There were only three in the women’s race which was won by Judith Russell (Phoenix CC) who also wins the overall series. Martina Hawkins (Dromara Cycling Club) was second with Caroline Martinez (Chain Reaction Cycles) third. In the Under 16 boys’ race, Seth Dunwoody (Shelbourne/Orchard CC) got his fourth win of the series which secured his overall league win. Samuel Coleman (Shelbourne/Orchard CC) finished second with Conor Murphy (Rostrevor Mountain Bike Club) rounding off the podium. Aine Doherty (VC Glendale) knows the park well as she trains here.

This would have helped her to secure her fourth win of the series and the overall league win for the Under 16 girls. Aliyah Rafferty (Island Wheelers) finished second with Greta Lawless (Team WORC) third and Zoe Lindsay (TC Racing) fourth. In the Under 14 boys’ race Curtis McKee (VC Glendale) made it his 6th win from 6 and the league win. James Armstrong (Dromara Cycling Club) finished second with Caleb McGreevy (Apollo Cycling Team) third. Aisha Gannon (Breffni Wheelers) won the Under 14 girls’ race. Emer Heverin (Kinning Cycles Cycling Club) finished second which was enough for her to clinch the overall league title. Cara Suckling (VC Glendale) finished third.

After another break for practice, the Men’s A’ race lined up at the start line but pointed the opposite direction to all previous races. This was done to allow the large field of 50 riders to complete a short loop to stretch out the bunch before they headed back through the start/finish in the correct way and out onto the main course. Unfortunately, there was a crash at the start which took out Alan Bingham (Newry Wheelers CC), Barry Kellett (Dromara Cycling Club), and Gerard Craig (VC Glendale). Gerard got going again quickly. Barry had to separate his bike from Alan’s before he set off but Alan didn’t go any further, retiring from his injuries. We wish Alan a speedy recovery. All eyes then moved to the front of the race with Christopher McGlinchey (Spectra Wiggle p/b Vitus) leading after lap 1 of 7. Christopher didn’t relinquish his lead and he powered on to take the win. Behind him was a close battle for second place between Dean Harvey (VC Glendale) and Darren Rafferty (Villeneuve Cycliste), who was doing his first cyclocross race of the year after taking a break from a long road season. Dean managed to hold off Darren to take second with Darren settling for third. Darnell Moore (Team Caldwell Cycles) finished fourth with Glenn Kinning (Kinning Cycles Cycling Club) taking fifth and Darragh McCarter (Spellman-Dublin Port) sixth. Lee Harvey (VC Glendale) was seventh and took the first unplaced Espoir (Under 23) prize. A visitor to the series, Robin Seymour (Team WORC), a rider with 20+ national championships to his name, finished 8th and took the first unplaced M50 prize. Oisin Ferrity (Island Wheelers) took the first unplaced Junior prize when he finished 10th overall. Barry Kellett, having recovered from the crash, managed to claw his way up to 15th and took the first unplaced M40 prize. The team prize went to VC Glendale when Jamie Meehan joined Dean and Lee Harvey at the finish line.

The final race of the day was for the Men’s B’s race which was held over 5 laps. No short starting loop for this race with just 27 taking part. Andy Ross (VC Glendale) lead after the first lap. Colin Deane (Unattached) lead after the second lap however it was Eamon Loney (Unattached) who got to the front of the race by the end of lap 3 and held that lead to the line. Sean Scullion (Island Wheelers) finished second with Colin Deane third, William Boyd (McConvey Cycles) fourth, Andy Ross fifth, and Aaron Wiley (Team Caldwell Cycles) sixth.

Many thanks to all the volunteers from VC Glendale who helped to build the course, marshal, or timekeeper during the day and then took the course down after the racing had completed. Many thanks to the sponsors for supporting the event and the club, and to Belfast City Council for the use of the park. Thanks to Dany Blondeel (The Belgium Project) for providing the commentary during the day. The next cyclo-cross race on the calendar will be the Ulster Championships which will be held on Sunday 12 December 2021 at CyclocrossNI in Portadown hosted by Velocity RC. Next week the World Masters Cyclo-cross Championships will be taking place in England. Best of luck to all the Irish riders traveling over to compete. Are you a cyclist wanting a year’s worth of FREE kit (worth £1000!)? The Belgian Project head sponsors Bioracer UK are running a survey to establish the habits of UK cyclists (including NI) when it comes to purchasing cycle clothing. Every participant who completes the survey will be entered into a draw to win an entire year’s worth of Bioracer cycling kit worth over £1,000!! 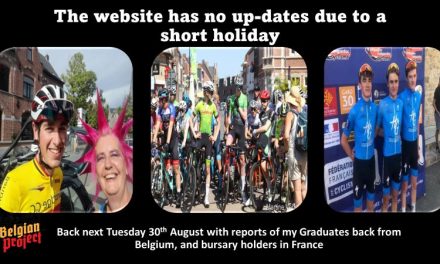 Just in case you wonder…a wee break of reporting…till next week!!