Knew Alan since 2006 when I first marshaled in the Tour of the North, and we met at all the events Ballymena RC promoted, he was part of the furniture so to speak of the club, and the same for the Tour of the North, when his daughter Joan and husband Hugh took over the running of the TOTN, Alan was there to support her, this with the whole family in his tow…a face I will miss, he always had a kind word for me, a gentleman at all times… My sincere condolences to his wife Mary, his children and grandchildren, the Mark and Mc Cullough families, and friends…Rest in Peace Alan

A tribute of our federation: Cycling Ulster is deeply saddened to learn of the passing of Alan Mark. Alan joined Ballymena Road Club along with his brother Ernie in 1955, just one year after it was founded, and was a stalwart of club activities ever since. As a strong competitor, Alan had many creditable achievements, winning provincial championship medals as well as setting the Derry – Belfast tandem record alongside his club mate, Sammy Connor. Alan was a driving force behind Ballymena Road Club for decades and took on various roles, from timekeeper through to President therefore it was fitting that he was made an Honorary Life Member of the club in 2019. Alan also had a significant role at a provincial level, serving as President of the NICF for many years. This passion for the promotion of cycling was passed onto other family members who have been prominent in the local cycling scene which has included helping to organise and run events such as the Wallace Caldwell Memorial and the Red Hand Trophy. Alan’s daughter, Joan McCullough has also been Race Director of the Tour of the North. On behalf of its members, the Cycling Ulster Executive extends its condolences to Alan’s family, his club mates, and friends.

Funeral and wake details can be seen below.
Mark Samuel Alan, 1st April 2022, peacefully at the home of his daughter and son-in-law Joan and Hugh. Much loved husband of Mary, 15 Fenaghy Road, Galgorm. Beloved father of Carol, Samuel and Joan, dear father-in-law of Hugh, devoted grandfather of Lauren, Stephen, Mark, Russell, and Adam, and great grandfather of Jayden, Harry, and Holly.

“Welcome to My journey” by Kevin Mc Cambridge….a great story to follow about a young cyclist from Cushendall near Ballymoney, now learning his trade in France as a full-time cyclist in Division 1 France!

What’s on this Sunday the 7th November in our fields and parks? Omagh Wheelers CX in Fintona (Tyrone), The Navan CX in Abbeyland (Meath), and the Youghal CX at the Claycastle Beach (Cork)

Cyclo-Cross conditions at his best in Portadown yesterday, mud, obstacles, a bridge, and technical grass sections…add over 200 entries and you have the perfect settings for a great day out for the CX family in Ireland (Sun 31st October) Promoted by Apollo CT from Craigavon (NI) 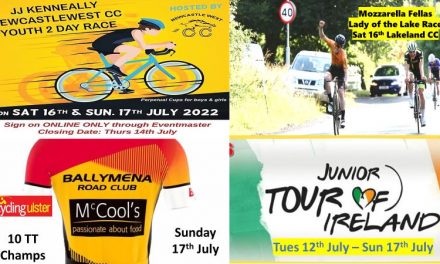