More feathers in the cap for the Para-Cycling Team Ireland at the Road World cup in Quebec-Canada…2 golds, and 3 silvers…Next is the “Para-Cycling World Championships” which take place this week from 11-14 August 2022 in Baie-Comeau, Canada…I bet more to come!!! 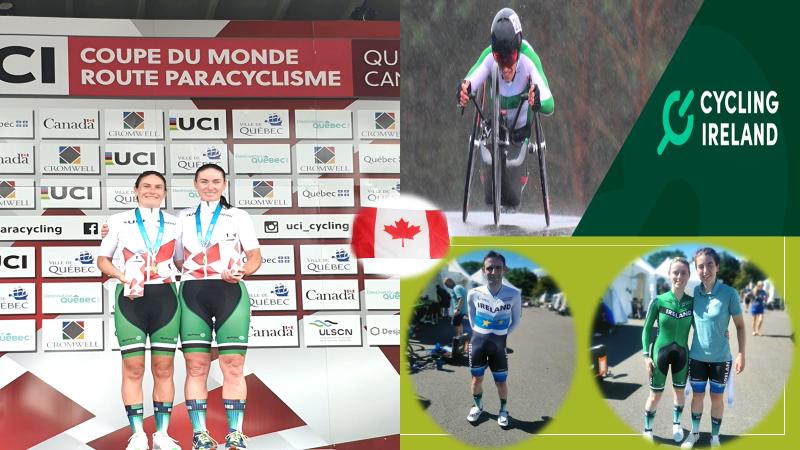 Photos and report from the social media of CI and website…with thanks…So well done Team Ireland …each one of you!!!

Ireland’s para-cycling squad took a fantastic one-two at the Para-Cycling Road World Cup in Québec, Canada in the women’s tandem time-trial and road race over the weekend. Katie-George Dunlevy with pilot Eve McCrystal and new paring Josephine Healion and Linda Kelly dominated both events to finish in first and second place respectively. Their outstanding performances over the weekend meant Dunlevy and McCrystal secured the overall win at the UCI Para-Cycling World Cup.

European Champion Ronan Grimes (above) won an impressive silver in the time trial and road race in the MC4 category. Damien Vereker and Dillon Corkery finished fifth in the men’s tandem time trial (photo below) and were unfortunate to suffer a DNF in the road race due to a broking timing chain. Gary O’Reilly (MH5) and Declan Slevin (MH3) were also in action over the weekend with O’Reilly finishing seventh and fifth in the time trial and road race respectively while Slevin finished in 14th place in both events.

Focus now turns to the Para-Cycling World Championships which take place from 11-14 August 2022 in Baie-Comeau, Canada. The team will look to emulate their recent success at the World Cup on to the World Championships.  Speaking about the goals of the team for the championships, Head Coach, Neill Delehaye commented; “The primary objective for the team in Canada will be to deliver performance consistency, across both time trial & road race in each competition, ensuring we secure adequate nations ranking points to keep Ireland on track with our Paris 2024 qualification ambitions. Most of the team are experienced campaigners and they have been working very hard since the last races in May to be at their best for August. Preparation has gone well, and I know everyone traveling harbors an ambition to push for podiums.” Irish only continental cycling team EvoPro is not giving up yet after CI pulled the carpet from beneath their feet!! To make this still possible a “GOFUNDME” page is established…please support this gateway for our talented youngsters!!! Here below is all the info you need to help out!!