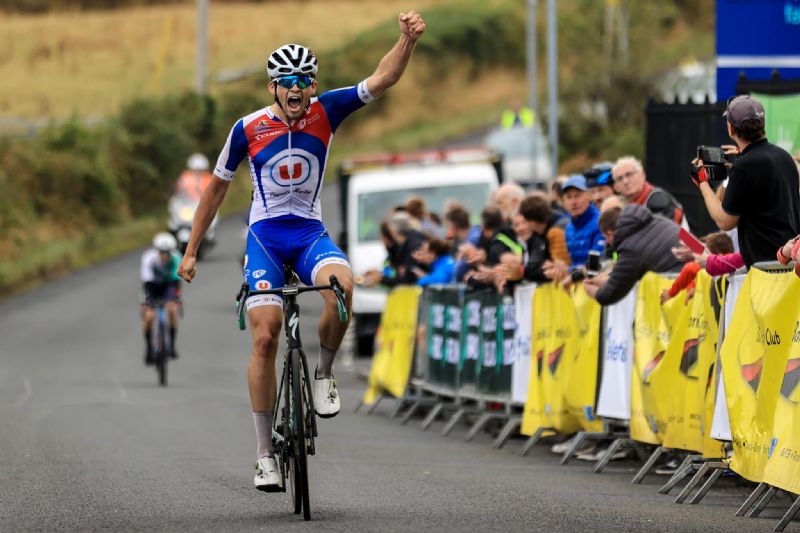 Photos courtesy of Ben Brady (https://client.inpho.ie/client-cyclingireland-nationalroadseriesround5-200822/) and results courtesy of Banbridge CC with thanks to both

Aaron Wade (Team U-Cube 17 FR & ex-BP bursary holder) and racing in the National Elite Division 1 in France (with already 2 victories in his pocket!!) and in Blazin form told the BP yesterday ” It’s a pretty big blur, to be honest 😆 I think on lap one there were a lot of attacks but only a small break got away. On The hill going onto the second lap, Matthew Teggart and John Buller put in a massive effort to break away from the main bunch. I and a few others managed to stay on their wheels. Going over the top I put a dig in and bridged across solo to the front group which had Luke smith, Daire Feeley, Garth O’Neill, and a couple of others that I don’t remember in it. We tried to hold off Teggart, Buller, Cigala, Dowling, and Aaron Rafferty but they eventually came across to join us. We worked well together as a large breakaway until I think the middle of lap 3. Our group had split. Buller had also gotten a puncture by this time. I don’t remember who all was in the front group for the last lap and a half. But on the last lap, there were a lot of attacks going from Daire, Garth, and Matthew. Eventually one stuck with Matthew and I. We worked well together to keep away from the chasers Cigala, Luke, Daire, and Garth. Coming into the last kilometer, Matthew was in front of me. He rapidly slowed down to get me in front of him so he could control the sprint from behind but as he did that I launch a little attack. We then turned left and sprinted full power up the steep climb. I was expecting to see Matthew’s wheel come by me as I was edging closer to the top. On the descent, to the line, I looked around and saw the gap was large enough to celebrate.”

John Buller from the Bioracer-DHL-FR services stable completes a successful weekend for the boys in blue at the Haldane Fisher North Down GP in Orlock Donaghadee!!

The first-ever Indoor CX in Ireland was held in Moira (Antrim) on Remembrance Day, an alternative is born, just magic!!

German Lennard Kämna (BORA-Hansgrohe) demolishes his opponents in stage 5 of the Volta Catalunya with a daring solo, while Dan Martin has recovered from sickness with a brilliant 5th place yesterday!!