2022 Ulster CX League (Round 7) hosted by Ballymena Road Club (Sun 27th Nov) The Irish CX Champ Christopher Dawson (Spectra Wiggle p/b Vitus) wins his first CX in the Champ Jersey, while teenager Lucy Brown (16) wins the women’s race, but the race of the day was the U16 boys, with Curtis Mc Kee (Scott Bright Motor Group) get the better of Cameron Henry (Inspired Cycling) in a exciting battle from the whistle!! 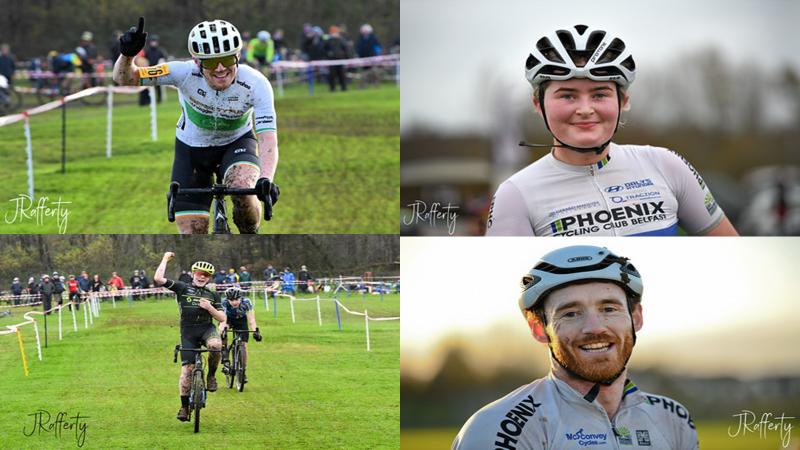 Round 7 of the 2022 Ulster Cyclo-cross Series took place on Sunday 27 November at Ballee Playing Fields in Ballymena. This was the second year that Ballymena Road Club has got access to this site. The site is relatively flat with lots of fast sections of grass around a gravel pitch which was used for parking. This year the host club included more sections within the tree area at the back of the site. The weather was fine all day with bright sunshine. It was windy during the middle part of the day which tested the course tape and gazebos.

The first race of the day was for the Under 6s. A one lap race around the Under 8s course which took the riders across to the tennis courts before traversing their way back to the finish. Well done to the 5 boys and 1 girl who took part. The Under 8s had 3 laps for their race. Conor McGahan (Square Wheels) won the boys’ race, his 6th win from 6 appearances. Daithi Hughes (Square Wheels) was second with Charlie White (Belfast City BMX Club) third. Ríonach Campbell (Square Wheels) got her third win of the series with Eabha Connolly (Square Wheels) second and Sophia Campbell (Phoenix CC) third.

The Under 10s course took them around the back of the tennis courts. They had 3 laps of their course to complete. Despite starting behind the boys, Aoife Campbell (Square Wheels) stormed through the field and managed to get a 30 second gap ahead of the first boy. Ruby Millar (Square Wheels) and Amelia Finnegan (Apollo Cycling Team) finished second and third girl respectively. Jack McGahan (Square Wheels) was the first boy across the line picking up his 6th win of the series. Leo Gallagher (Shelbourne/Orchard CC) finished second. Cahir Hughes (Square Wheels) was lying third but had a poor final lap which let Jake McKee (VC Glendale) through to take third place. Cahir had to settle for fourth.

Eunan Campbell (Square Wheels) ran away with the Under 12 boys’ race finishing over a minute ahead of his nearest rivals, Daragh Quigley (Foyle CC) and Rory McCool (Square Wheels) who finished second and third respectively. There were only two Under 12 girls in the race with Ava Baker (Breffni Wheelers) and Skye Spence (Shimna Wheelers Cycling Club) finishing well up among the boys.

.After a short break it was on to the Under 14s, Under 16s and Women. Caleb McGreevy (VC Glendale) was again back to winning form in the Under 14 boys’ race, picking up his 6th win of the series. Josh McClune (Team Madigan C.C.) was second with Jamie Ervine (Apollo Cycling Team) completing the podium in this category. Emer Heverin (Kinning Cycles Cycling Club) put on another fine display of racing in the 4 lap Under 14 girls’ race. Aoife Craig (VC Glendale) was second with Clodagh Quigley (Foyle CC) third.

The Under 16 boys’ race saw the usual close battle between Curtis McKee (Scott Bright Motor Group) and Cameron Henry (Inspired Cycling). They were riding wheel to wheel with the decider coming down to a sprint finish to the line. There was a triumphant shout from Curtis when he crossed the line ahead of Cameron. James Armstrong (VC Glendale) finished third. In the Under 16 girls’ race, early leader Aisha Gannon (Breffni Wheelers) pulled out after one lap. This left Cara Suckling (VC Glendale) to take the chequered flag with Elisa Sunderland (Lisburn BMX Club) second.

The Men’s Cyclo-cross A’ race took place next over 9 laps. Making his first appearance in the series was the national champion, Christopher Dawson (formely McGlinchey) (Spectra Wiggle p/b Vitus). Some of the usual big hitters in this race had been racing the day before at the National Cyclo-cross Series in Drombane, Co. Tipperary and had not attended this race. This left Christopher to do what he does best. Put on a powerful display of racing! Junior rider Oisin Ferrity (Island Wheelers) was lying in second place for the first two laps before some bad luck dropped him back to fourth. Glenn Kinning (Kinning Cycles Cycling Club) recovered quickly from a crash at the boards on the first lap to get himself up to second place at the finish. Graham Boyd (McConvey Cycles) put on a consistent performance which awarded him with third overall. The first unplaced Espoir prize went to Jamie Meehan (Spellman-Dublin Port) who finished fifth. David O’Neill (Inspired Cycling) had a great tussle with club mate Jason Henry for most of the race. David finished 6th and picked up first unplaced M40. Jason finished 7th and picked up the first unplaced M50 prize. Christopher McCann (Banbridge CC) picked up first unplaced M60. The team prize went to Breffni Wheelers. This was the first time that the club has won the team prize and Pierre Kinsella, John Lord and Bryan Gaffney looked very proud standing in front of the podium.

Speedy recovery to Gerard Heverin (Kinning Cycles Cycling Club) who crashed heavily on the boards. He was taken off site in an ambulance as a precaution but has been released from hospital at the time of writing this report.

The final race of the day was for the Men’s Cyclo-cross B’ race and the mountain bike support race. With Gerard Heverin still being attended to on the course, the course was quickly amended to allow the race to proceed. Under bright afternoon sunshine the races headed out on the course to complete 7 laps. The front end of the Men’s B’ race was very exciting. Peter Oliver (The Bike House CC) was leading after lap 1, dropped back to 8th before finishing 6th. Peter Campbell (Phoenix CC) lead from lap 2 to lap 6 but was then overtaken and dropped back to third.

Winning the race was Edward Kearney (Phoenix CC) who worked his was up from 12th to take the win. Conor Dooney (Foyle CC) worked his way up from 10th to take second place. Darren McCann (Dromara Cycling Club) got up into a podium position for laps 4 to 6 but dropped back to 4th at the end. Vinny Mort (Dunloy CC) stayed consistent to finish fifth. All eyes were on Jon Hilditch (Ballymena Road Club) who had designed the course. He was lying in second place for the first 3 laps but ended up 7th at the finish line. In the mountain bike Men’s support race, Gavin Thompson (Un-Attached Ulster) won the battle with newcomer to racing Ryan Beech. Barry Kelly (DB Cycling Club) finished third with series leader Gerard Curran (Tir Chonaill Gap CC) crossing the line in fourth place.

Well done to all the volunteers from Ballymena Road Club for putting on an excellent race and a great venue. The final race of the series will be next Sunday, 4 December 2022 at Palace Demesne, Armagh hosted by Square Wheels. This site was last used for the National Championships back in January 2022. Commissaires: Jim Adams and Martin Grimley >>> https://ulstercyclocross.com/wp/wp-content/uploads/2022/11/Ulster_Cyclo_cross_2022_Round_7_Ballymena_Results.htm <<< Series table after 7 rounds https://ulstercyclocross.com/wp/wp-content/uploads/2022/11/Ulster_Cyclo-cross_League_2022.htm The 2022 Cross-Country National Point Series (Round 1) hosted by my beloved club Ards CC at the Lead mines in Newtownards, Co-Down…A wet day it was yesterday (Sat 30 April) but a very competitive event all around!! Darnell Moore (Caldwell Cycles) wins the Senior Men 1, his second win in Ards, after winning the TOA Classic road race in March!!

Top Belgian Cycling Photographer Martine Verfaillie visited the CX Champs in Enniscrone last weekend in Ireland…here some of her Fantastic work! A big thank you in behalf of us all…Bedankt en Merci