The Irish National Road series (rd7) with a hilltop finish!!

August 28, 2019 – IRELAND’S top-ranked domestic rider Charlie Prendergast is out to make his mark on the Cycling Ireland National Road Series this Saturday, as St. Tiernan’s Cycling Club host round six in Laragh, County Wicklow. The Castlebar CC rider has been flying high at the top of the Cycling Ireland Men’s Rankings all season, and presently leads Powerhouse Sport’s Lindsay Watson, National Road Series leader Conor Hennebry and third-placed Darnell Moore. He’s won 11 races this year, including the Connacht Road Racing Championships, and Ras Mhaigheo stage race, but has largely steered clear of the National Road Series, his only points coming from seventh at his most local event, the Mullingar GP two rounds ago. However, Saturday’s Laragh Classic is an opportunity for Prendergast to make an impact, with a small maximum field of only 60 riders, and a short course of 87km that goes up the famed Wicklow Gap twice, finishing at the summit. “I haven’t really performed in any of the National Road Series races yet,” he said. “I just seem to keep getting in wrong. It’s trickier than other races, a lot of the guys are at a really good level, so the racing isn’t just about being smart, it’s about being strong all the way as well.

“I don’t know what I can do on Saturday. All I can say is it’s going to be my hilliest race, and I’m not sure whether that will suit or not. I’m just hoping that I can get it right this time.”Of his successful season, he added: “It’s been a great year. I never really went out looking for any number of wins, I just tried to get myself in the best shape I can, and see what happens. I haven’t really changed anything, but I did get a new coach this year, Simon Walsh. He used to coach my brother. I rang him in January, and it’s been a match made in heaven ever since.”

Among Prendergast’s select rivals are the three men sitting below him in the Cycling Ireland rankings, plus the winner of NRS2019 round three, Chris McGlinchey, recent North Down GP winner John Buller, and two former Laragh Classic winners – Hennebry and Mark Dowling, second and first in the last National Road Series round at the John Beggs Memorial Road Race.

The Women’s National Road Series has been led by Cork’s Grace Young since the STRATA3/Velo Revolution rider won the first round, the Des Hanlon Memorial Road Race in County Carlow. Her team now also leads Ballymena Road Club in the Team Classification as we reach round six of seven. The Men’s and Women’s National Road Series fields will race 87km, with races beginning at 10.30am from the Brockagh Centre in Laragh, County Wicklow. The 7th running of the Laragh Classic race for the Wicklow Granite Cobble will be covered live on Twitter via @CINatRoadSeries this Saturday from early, Jessica 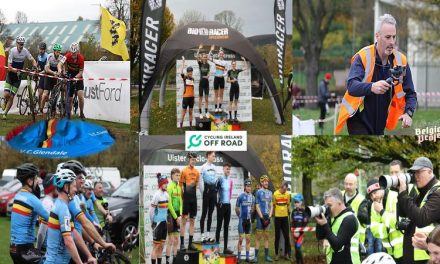 64 times climbing the Mamore Gap in 8 hours 13 minutes…a provisional 5th in “the Everesting Challenge ” worldwide while raising money for a brilliant cause…Yep…Ronan has done it!!