Leo passed away on 6th December 2019 following many years battling cancer. Leo and his family received hugely important care from Marie Curie Cancer nurses during Leo’s final days. Leo simply wanted to die at home and the support of Marie Curie nurses made that possible. The aim of Leo’s Legacy was to raise essential funds for the Marie Curie charity, which is now even more critical with the impact of the COVID pandemic on all charities. Leo’s daughter Siobhan added, “in addition to raising much-needed funds for Marie Curie, we also wanted everyone to join in and have a laugh. Daddy always enjoyed a bit of craic and banter with all the cyclists”. Originally planned for 19th April 2020, the event was postponed due to COVID. Leo’s family then decided to make the event virtual to provide the flexibility for everyone to take part, whilst still working within COVID restrictions. 2 Days/200 Miles/2 Ways – the virtual event gave participants the flexibility to complete it across two days (Saturday 7th and Sunday 8th November), with an aim to cover 200miles.

Participants had two different ways to do it: online or on the road. And, participants could do the distance individually, or as a group using their combined distance to get the target. Leo’s son Stevie rode 100miles each day on the virtual platform called Zwift. Meanwhile, Leo’s daughter Siobhan and son Kieran took to the roads with local club Omagh Wheelers and completed the 200miles as part of a small group ride with Leo’s grandchildren. Leo’s wife Mary, now 79, also completed part of the distance of a turbo trainer. Leo’s nephews and nieces in Co Monaghan arranged a brilliant event for kids, with each completing a 5km loop to build towards the distance. The McKenna family were given massive support from other clubs around the country who did their own 200miles in their own areas. Newry Wheelers and Strabane CC-Lifford were two examples of many who took part in raising superb funds.

Omagh Wheelers Chairperson Sean Kelly, along with club-mate Shane Kelly took the initiative to organise a motorcycle event in support of the cycle event. 45 motorcyclists traveled from as far as Ballymena and Killybegs in Co. Donegal to be part of the special event. Alone the motorcycle event raised almost £1000 which was amazing.

And there were many other awesome challenges taken on by individuals such as Omagh’s Ed Casement and Mickey Gallen who completed 200miles on their own across the weekend. Once again the cycling community and family have shown how much support it provides for each other. Proper passion and friendship shared through the sport we all love. The McKenna family wanted to pay tribute to everyone who has helped in any way towards supporting the event. Leo’s wife Mary McKenna said “we are very humbled and taken back by the support we have received in memory of Leo. He would have loved to be stuck in the middle of it all. The support we received from Marie Curie was priceless, so the funds we have raised go to a very worthwhile cause”. ANYONE WHO WANT TO DONATE STILL CAN until Friday 20th November. Donations can be made online at Leo’s Legacy – 2 Days 200 Miles 2 Ways, organized by Kieran McKenna https://uk.gofundme.com/f/owcc-campaign-for-marie-curie-cancer-care

Spinach wins over sprouts, Van der Poel wins after a 9 lap solo, and does a Popeye muscle sign at the finish line! Van Aert wins the battle for second place at the UCI World Cup in Hulst (NL) yesterday (3/01/21) 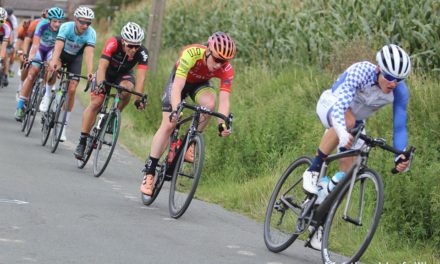 Niels de Vriendt, a 20-year-old Espoir who raced for VDM-Trawobo, died this afternoon after a crash in one Cat 1.12 Elite practice race in Wortegem-Petegem (Bel) RIP Niels …Rust in Vrede…