It’s official…the World Champs Cyclocross is going ahead this weekend in Oostende!! All those present are subjected to corona tests and no spectators allowed (only invited media and TV crews, and limited team crews)

Press-release: Today all parties involved came with a joint press release, in which the world title battle was confirmed with extra measures. Among other things, no joint meals may be taken, attendance is severely limited and there is an adjusted test strategy. Good news for cyclists, cyclists, and the many cyclocross fans. After intensive consultation between the city, Flemish Minister of Sports Ben Weyts, the UCI, and Belgian Cycling, Oostende will be the scene of the Cyclocross World Championships on 30 and 31 January. Extra measures will apply on and around the course so that the World Cup will take place in the safest conditions.
Last weekend, the South African variant of the coronavirus surfaced in Oostende, as a result of which mayor Bart Tommelein announced during the seventh day that “the World Cup was under discussion”. The alarming noises were quickly quelled, yesterday the mayor was completely reassured.

Extra measures “After a preparation with a lot of corona obstacles, the organization of the World Championship cyclocross in Oostende managed to finish the course prematurely”, it says. “Everything is currently ready to receive the international top of cyclocross next weekend “To ensure that everything runs smoothly and above all safely, a lot of measures were taken on and around the course. All those present are subjected to corona tests. The test strategy consists of a mix of regular PCR tests and rapid tests, this strategy was agreed with the virologists discussed and checked content” “In addition to the traditional measures (wearing a mouth mask, disinfecting hands, keeping sufficient distance) functional bubbles are used (media, organization, and riders/carers), the contacts between those bubbles is reduced to an absolute minimum by means of specific flows and signposted walking directions. The number of attendees was also reduced to a minimum from the start. The measures are even stricter than described in the current protocol. In this way, the organization wants to prevent any spread of the virus within the boundaries of the course“

Watch it on TV this weekend

What’s on in the next 2 weeks open event-wise? Cyclo-crosses in Louth, Cork, and Armagh (Nationals) and a New Year Eve TT in Dunleer Co-Louth…*Wishing you all a healthy and prosperous 2022* 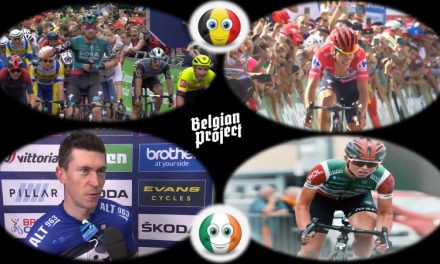 What a day it was yesterday for the Belgian and Irish cycling pros!! Remco Evenepoel’s (Quickstep) domination in the Vuelta, his countryman Jordi Meeus (BORA-Hansgrohe) wins stage 5 in the Tour of Britain, Matthew Teggart (Wiv-Sungod) again in the break, and strengthens his lead in the sprint GC, he has won now, as the rest of the stages are cancelled due to the death of Queen Elisabeth 2! Megan Armitage 4th in stage and GC in the “Tour Cycliste Feminin International L’Ardeche” in France!! (Thur 8th Sept)