Thanks to Brian Hammond (Cycling Leinster) for the results, Paul Joyce (MC) for the report, Caroline Kerley and Fran Hollywood for the photos (as indicated)

Paul Joyce, the Master of Ceremonies and commentator of the race told his social media followers ” Should really start by congratulating all the Leinster title holders, but I’ll put that on hold momentarily. Podiums are put into perspective when we collectively remember that we are a community that spans all 4 provinces. One of our own, and one of the true greats of our sport, was all set for a podium, and a potential Leinster title, having led for the duration of the M50 category, only to succumb to a fall and a resulting horrific injury to close off a birthday weekend that will be remembered by the unfortunate John Doris. I would ask that you send your best wishes in the comment section to John, in return- the post will be forwarded to John and the Doris Family in a print /email. With John commanding the first 3 laps from Fearghal Regan, it was lap 4 that ended John’s race and the possibility of a sprint finish from the marauding and newly crowned Leinster Champion Fearghal. A season’s hard work paid off for the popular Kildare man. The M40s had more drama than incident, Ronan Flynn led from start to well….. almost …..finish…Remember 3 years ago in Cork when Ronan ran 90% of lap one with a puncture, then lightning struck on lap 2, another puncture another 90% to the pits, well fast forward to Bellurgan and a Leinster title within grasp only for a chain to deny any title in the Orwell man’s house, that title went to his next-door neighbor (ye couldn’t make this up). Colm McGarvey never gave up the ghost as he held off Kevin Keane (3rd), So congrats to Colm as Ronan carried the bike to a silver. The Roche sisters added to their impressive season’s tally, Steph took the senior title, as Annie claimed the junior title, Helen White took the masters ahead of Mary Dawson, one feels that Armagh could bring more rewards. The Elite race brought out the best in race favorite Sean Nolan, another master class from the Navan man as he secured Leinster, Davy Conroy showed glimpses of why he has a National title as he sat 2nd for 6 laps holding off the challenge of Niall Davis and Tim O Regan, Davy fell victim to a puncture on the last lap as the fast approaching Davis used all his mountain biking skills to claim silver, Davy Conroy ensured that Wicklow would have 2 representatives on the podium as he added the bronze to his collection. A massive shout out to Brian McCrystal and to his right arm aide Lorna Reilly, Brian is showing and providing how it should be done, Lorna gets it done, to John Hammer, Ronan, and to Leo for making the journey, remember we are one big family, and one of our members has joined Leah and Bingo on the get well list, Sunday wasn’t to be for John Doris, you don’t need a medal to be a Champion!!” 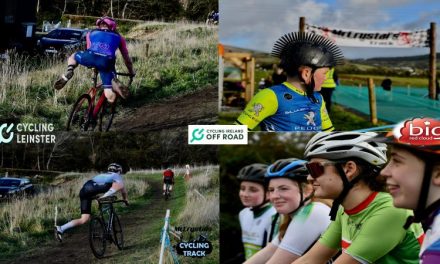 The wonderful world of CX at the “Mc Crystals Cycling track” The Big Red Cloud League (rd 2) & Leinster CX League (rd 3) got record nrs and if you ever have been there in Jenkinstown,…you know why!! An in dept report from Bryan Mc Crystal (Owner) with great shots of Castlebellingham’s finest Caroline Kerley!! (Sat 5th Nov)

The final results of the 2021 Ras na mBan (Stage 6) with the finish at Kilkenny Castle…Our irish girls can be very proud of themselves, every single one!! Well done to Anna Shackley (Team GB) for the overall win! (Sunday 12th September) 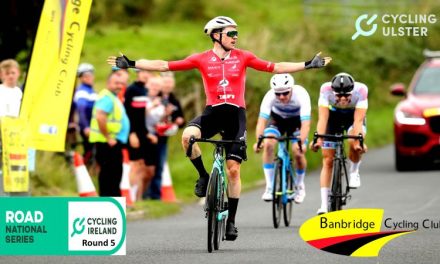 Cycling Ireland Road National Series, Round 5 (and final round) in Dromore (Co-Down) hosted by Banbridge CC tomorrow (20th August) The entries of the 3 races on offer…some big names entered!!