Foreword Dany: ” As I witnessed a magic CX Championship in Armagh last weekend, and promoted by local club Square Wheels CC. We decided to have at least a few interviews with the authors of an immense battle in the Elite Men, this before and after podium presentations and happy that Chris and Sean took so time out, as it was getting cold and they both being knackered after such display of skill and determination in the mud of the Palace Demesne grounds of Armagh. The interviews made it easy for me as these lads are loving the sport and this reflects so well when chatting… it’s like the camera is not there… Here below is what they had to say…

5 riders will represent Ireland at the 2022 Cyclocross World Championships in Fayetteville, Arkansas from 28-30 January

Sean Nolan and Dean Harvey will represent Ireland in the u23 men’s race on Saturday, January 28th. Nolan claimed the silver medal in the men’s race at the Cyclocross National Championships after a tough battle with Chris McGlinchey while Harvey came home in 4th position.

The Junior Men’s team includes 2022 Junior Men’s Champion Liam O’Brien and runner-up Travis Harkness. O’Brien represented Ireland at the European Cyclocross Championships in the Netherlands in November and battled to a top-20 finish after being gridded at the back of the field. 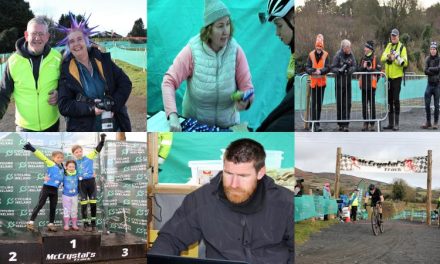 “THE BEST OUT OF THE BELGIAN PROJECT MEETS…” PART 9: Adam Ward, a chat with an Ex Irish Junior Champ, classic winner, and kermesse specialist after winning “the killowen Contracts Tour of the Mournes 2018”