On Sunday 6 February, the Cycling Ulster Youth Academy held their pre-season training day for all youth riders in the province to attend, hosted by Orchard CC (Co-Armagh) and promoted by CUYA Report from Gerry Heverin (Kinning Cycles) Photos courtesy of Jerry Rafferty (Armagh) with thanks to both.

Gerry told the Belgian Project: “The training day was based at Pearse Og’s GAA clubhouse in Armagh, kindly hosted by Orchard Wheelers CC, and with them also promoting the Irish Youth National Championships this year in August we took the opportunity to have a ride around the course that will be used. The weather may not have been ideal but hopefully, it will be better in August but that is never guaranteed. We were very fortunate to welcome Derek Finnegan as our guest speaker and he covered the important topics of injury prevention and bike set up before the ride out, and after the ride out the topic of nutrition and many other issues were discussed. We also had Noel McLoughlin from the Cycling Ulster Road Commission along and he rode with the under 16 group to get a look at how they were getting on“

“The day was very well attended with over 30 riders taking part. They all set off together from the clubhouse and out the Hamiltonsbawn Road from Armagh. Once out the road, the group was split into 2 with the under 14 and 16 riders going in the first group and the under 12s following behind, with lead car and sweeper vans for all groups. The under 12s completed the 6-mile cycle out to the circuit and then did 1 full lap of the course (approx 6 miles) before returning to Armagh, while the under 14s did 2 full laps along with the under 16s before they returned to Armagh. The under 16s continued on to complete 3 laps in total followed by a windy return leg back to the warmth of the GAA club where sandwiches and tea/coffee were a very welcome sight“

“Some of the points emphasised by Derek in the talks were to try and stretch after your rides, do some basic core exercises to help improve your stability on the bike, and the importance of routine in the lead up to races with no last-minute changes in diet or bike set up which could lead to problems during the race”

“The talks and advice were very well received by all present and the CUYA would like to thank Derek for his time and great advice, also to all involved in helping out on the day and who played in part in making it such a success. Hopefully, this will be the first of many of these type of events, and there was a lot of positive comments from parents and many smiling faces on the youth riders as they left” Gerry reported

Looking forward to this weekend’s races promoted by Drogheda Wheelers…I feel a long awaiting “road trip” coming up to catch up with the Southern road racing scene! 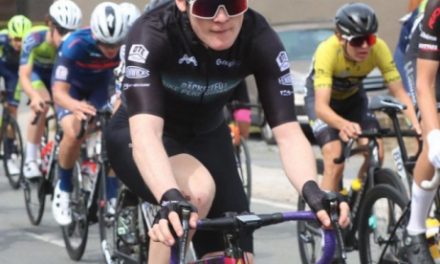 Newport’s International junior, and 2022 BP bursary holder Niall Mc Loughlin (Covey Wheelers Westport Cycling Club) sent us the story of his adventures with the Irish Team, and guest riding for “Team Backstedt” in the Flanders…Niall certainly will be a force to reckon with in the coming years…we wish the “Mayo Bullet” all the luck in the world!!

64 times climbing the Mamore Gap in 8 hours 13 minutes…a provisional 5th in “the Everesting Challenge ” worldwide while raising money for a brilliant cause…Yep…Ronan has done it!!