The Apollo CC CX (Rd 5 Ulster League) was held yesterday in Portadown at the venue of CX-NI, situated on the “Whiteside Hill” private grounds of James Wilson…A cracker of a day enjoyed by all involved in pleasant autumn weather conditions!! (Sun 6th Nov) 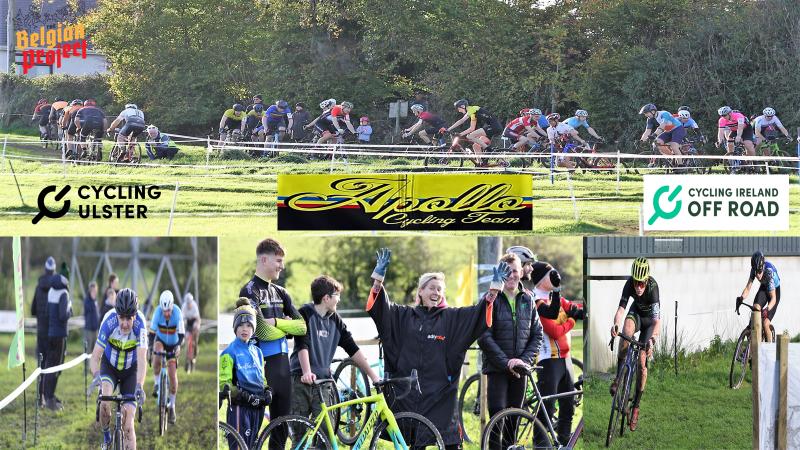 Report Martin Grimley (Chief Comm) with results from Martin and the Apollo CC time team, with thanks to both! (Photos Dany+some podiums of Jerome of the BP media, and some winning photos of Jerry Rafferty (Fotozone Armagh)

The 5th round of the 2022 Ulster Cyclo-cross series took place on Sunday 6 November at CyclocrossNI, a private, permanent cyclo-cross course just outside Portadown. The event was hosted by Apollo Cycling Team headed up by event organiser Chris Corey. The event had attracted 195 entries. The riders were greeted to a dry day with lots of warm winter sunshine. In contrast the grass was muddy and wet in places but with the new drainage added to the site from last year, conditions were excellent for cyclo-cross. The course had also been redesigned to provide longer sections with less corners, a double pit and a new start area for the main races. The highlight features were still in place with the steps, sand, bridge and duel slalom style descent from the top of the hill to the lower field.

The Under 6s were the first to start and they lined up beside the timing tent and had 2 short laps to complete. Well done to the 9 young riders (7 boys and 2 girls). The Under 8s started further back on the grass. This gave them a longer run into the tight 180 degree turn just past the timing tent. Their course included the sand feature at the top of the hill and they managed 2 laps within the 5 minute target race time. Lined up were 6 boys and 6 girls. Taking his fourth win of the series in the boys’ race was Conor McGahan (Square Wheels) with James Kavanagh (Lakeland) second and Daithi Hughes (Square Wheels) third. It was the third win for Sophia Campbell (Phoenix CC) in the girls’ race when she finished ahead of Ríonach Campbell (Square Wheels) and Eabha Connolly (Square Wheels). Next up were the Under 10s. Their course was longer than the Under 8s one and they again had 2 laps to complete. It was the turn of Jack McGahan (Square Wheels) to get his fourth win of the series when he crossed the line first in the boys’ race.

.In the Under 16 boys race there a good battle between Curtis McKee (Scott Bright Motor Group) and Cameron Henry (Inspired Cycling) with Curtis getting the win. Cameron was second with Harry Hobbs (VC Glendale) taking third. In the U16 girls’ race Aisha Gannon (Breffni Wheelers) got her fourth win of the series when she finished ahead of Rhiannon Dolan (Cuchulainn CC) with Cara Suckling (VC Glendale) picking up third.

Caleb McGreevy (VC Glendale) was the expected winner in the boys’ Under 14s race and he didn’t disappoint. This was Caleb’s 5th win from 5 rounds. Josh McClune (Team Madigan C.C.) finished second with Jamie Ervine (Apollo Cycling Team) picking up the third place medal. Emer Heverin (Kinning Cycles Cycling Club) picked up her third win of the series when she finished ahead of Aoife Craig (VC Glendale) and Clodagh Quigley (Foyle CC) who picked up second and third respectively.

The Men’s Cyclo-cross A’ race then lined up for their 7 lap race. With Dean Harvey (Spellman Dublin Port) putting in a superb performance the day before at the McCrystal track in Co. Louth, all eyes were on this young man to see what he was going to do in Portadown. Dean put on a master class of riding. After lap 1 he was 47 seconds clear of the chasing riders. This gap just extended and extended. By the end of 7 laps the lead had extended to 4 minutes – around half a lap ahead of everyone else. The ‘everyone else’ was headed by Graham Boyd (McConvey Cycles) who is coming into form and putting in some great results. Graham was comfortably ahead of Des Woods (Newry Wheelers CC) who took the third place on the podium. David O’Neill (Inspired Cycling) was fourth and picked up the first unplaced M40 prize which he had to work hard for to keep Barry Convery (Newry Wheelers CC) behind him, who was also going for the same prize. Jason Henry (Inspired Cycling) finished 6th and picked up the first unplaced M50 prize. The other unplaced prizes went to Paul Birchall (Verge Sport PI Cycles) (unplaced M60), Jamie Moss (Ballymena Road Club) (unplaced Junior) and David McCarthy (Verge Sport PI Cycles) (unplaced Espoir). There weren’t enough teams in for a team prize.

The final race of the day was for the Men’s Cyclo-cross B’ race and the mountain bike support race. Both were held over 5 laps. After many attempts, Ciaran Campbell (Square Wheels), finally made it to the top step of a podium for a B’ race. His win was a popular one with lots of cheers from the crowd. Stuart Suckling (VC Glendale) finished second with Glen Curry (Ards CC) putting in a strong final lap to take him up to third. Ciaran, Stuart and Glen are now upgraded to the A’ race. Darren McCann (Dromara Cycling Club) was fourth with Jon Hilditch (Ballymena Road Club) fifth and Daniel Todd (Dromore CC) sixth.

A huge thanks to Chris Corey and to all the volunteers from Apollo CT for helping to run this race. Many thanks to James Wilson, who owns, builds and maintains the site. A top class venue. A big thanks to WhitesOats, Tandragee for sponsoring some great prizes of their 1kg bags of oats. The next round (Round 6) will be at Falls Park in Belfast hosted by VC Glendale. Details of the event are on www.ulstercyclocross.com. Commissaires: Jim Adams, Martin Grimley and trainee Liz Roche 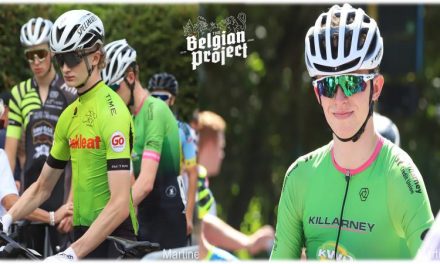