A long day that started with a hearty breakfast courtesy of CU for all the delegates of Ulster (with thanks), followed by a lively Q & A session needed to clear the troublesome air, lunch courtesy of CI, and another long afternoon of discussion and presentations and voting, this to conclude at early evening…The Cycling Ireland 2022 AGM at the Four Season Hotel in Monaghan Town (Sat 5th Nov) 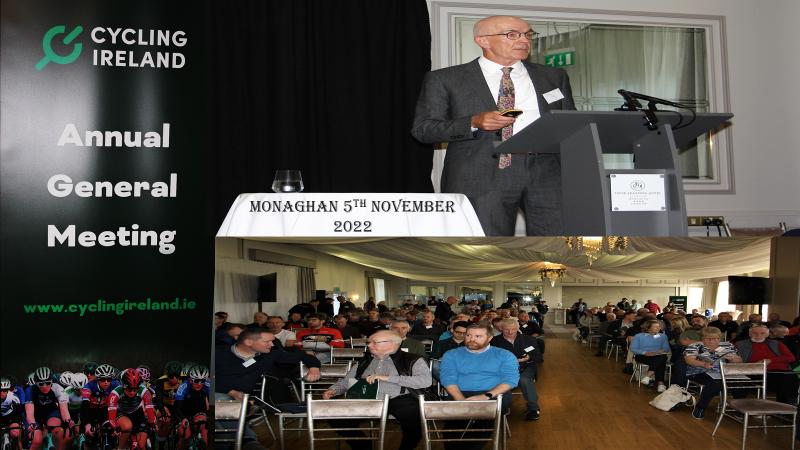 Foreword Dany: “It is maybe me…but nothing today made it much clearer what happened in a year of controversial and questionable decisions of the Irish Cycling federation…The Evo-Pro deal was brought up by PJ Nolan (ex president CI before my time in Irish cycling) representing the continental team based in Belgium, while Liam Collins who resigned as CI president a few months in his term (Feb 2022) asked about some figures or details of made expenses, as a chartered accountant in his personal life, Liam has the skills to look at things that most people wouldn’t look for, but both have tried to make a “path way” for Irish U23 talent to the pro-ranks ( this story has been well published and I won’t go in that one) But both done this with the love for the cycling sport and towards the development of young aspiring espoirs, but the board and speaker took some offence due to some words used (or maybe afraid some things would see daylight) and quickly the very interesting discussion was stopped, I run my project to give young talents the chance to “Live the Dream” and they deserve to get the chance to explain what really happened (PJ can provide hard evidence he claimed) Some delegates asked the CEO Matt Mc Kerrow why he was still there, as he was in charge during all the shenanigans whom incurred in the last 2 years, and 700.000 Euros has been spent ( are wasted) on legal and consultants alone!!! But on a positive note the CI board has admitted they could have done better, and rectified already some things that was needed to reclaim the grants who had been stopped from Sport Ireland!! We still not any wiser who was responsible of the alleged fraudulent claims been made during the Covid period, this explained “as due to legal reasons” we are not allowed to reveal, an explanation we get tired off!! 26000 + members need to be told the truth, not a version of it…Its like braking wind but looking around to blame some one else... to be fair a lot of positive things came out this AGM, women get on a equal footing and long time due, a more transparent approach is promised, and let’s see if the new elected president (Dr Tom Daley from the province Munster) can sort some things out, I wish him good luck nevertheless, and also the new board that was established to replace the many retirements and the leaving of many of the old board earlier this year …. they new board basically stepped on a sinking ship at the time, and made it float again, and now we need a crew who get the boat back sailing in search of better things to come…but we needed some facts which we are entitled too as members, but understand that’s my take on it…I want to see CI doing well…but they will also need to step up….as the distrust of many members, and there anger is very much felt…yours in sport, Dany B (this is my personal views, maybe not liked by some, but I am a simple soul, and in this game to promote my beloved sport since I was 4 years old…I am now 66 soon and will love it till they put me in a box and burn it….sometimes I take things by heart to much due to my passion, but can not change who I am, love you all)

Some shots I took during the long day