The 2022 XC-MTB Ulster Champs was held in glorious sunshine at the White Spots Country Park in Newtownards, hosted by Ards CC, the club I belong too…may low numbers but it didn’t take away the spirit of this technical and exiting part of our beloved cycling (13 August)

In-debt report, and result from Martin Grimley (Off-road Ulster commission & chief com), all photos David McVeigh (BP media) with thanks to both

The Ulster Cross-country Mountain Bike Championships took place on Saturday 13 August 2022 at White spots Country Park (the lead mines) which is just outside Newtownards. Host club Ards Cycling Club had already run a cross-country race back in April this year which was Round 1 of the National Point Series (NPS). Back in April, the event attracted over 200 entries. Unfortunately, the Ulster championships attracted less than 70 entries with many of the regulars on holiday or doing other cycling events. The week leading up to the Ulster championships was a mini heatwave with clear skies and warm sunshine. This left the lead mines in great condition with dusty trails. The biggest challenge for the host club was to cut back all the ferns and whin bushes (gorse) that had grown since the last event. Race day had started out with some cloud cover which did make for cooler conditions for the youth races. However, by noon the clouds had dissipated and the sun was beating down on the Junior and adult riders. A change of schedule, due to the small number of participants, meant that there was just one junior/adult race which took place at 1 pm and lasted for 60 minutes. The shorter race was a relief to those who were racing at the time.

First race of the day was for the Under 8s which was held over 2 laps of a short course. Elijah McClintock (Lisburn BMX Club) took the win in the boys’ race with Oliver Gundersen (Killinchy Cycling Club) second and Logan McAreavey (Cuchulainn CC) third. Ciara McCool (Square Wheels) was the solo entry for the girls’ race. The Under 10s used the same course but they did 6 laps. William Sunderland (Lisburn BMX Club) lead the boys’ race for 4 laps until he was passed by Jake McKee (VC Glendale) who took the win. William finished second with Noah Kelly (Lisburn BMX Club) finishing third. The Under 10 girls’ race was an all Lisburn BMX Club affair with Lucy Baxter taking the win ahead of club mate Lila Rose Macauley with Emily McClintock taking third. The Under 8s and 10s were non-championship races.

The first of the championship races was the Under 12s. They had a new course this time which took them up ‘heartbreak hill’ – a steep rocky climb. They had 5 laps to complete. Darragh Murphy (Rostrevor Mountain Bike Club) crossed the line first for the boys’ race with Rory McCool (Square Wheels) second and Kealan Doherty (Foyle CC) third. In the girls’ race, Sophie Baxter (Lisburn BMX Club) took the chequered flag ahead of Skye Spence (Shimna Wheelers Cycling Club) with Carmen Buchowicz (Team Caldwell Cycles) completing the podium.

The Under 14s and Under 16s raced next – the Under 14s aiming for a 30-minute race and the Under 16s aiming for a 50-minute race. As expected Curtis McKee (Scott Bright Motor Group) flew around the main course finishing well ahead of the nearest rival Caleb McGreevy (Apollo Cycling Team). A visitor to the country Karel Pruijn finished third but it was Adam Matt (Banbridge CC) who would get the Ulster bronze medal. Lacey Aicken-Johnson (North Down CC) put on a strong performance in the 2-lap Under 14 girls’ race to take the win. Maeve McCool (Square Wheels) was second with Elisa Sunderland (Lisburn BMX Club) third.

With just 2 entries in the Under 16 boys’ race, Harry Hobbs (VC Glendale) took the win ahead of Danny Copeland (Un-Attached Ulster). Aliyah Rafferty (Island Wheelers) was the only entry for the Under 16 girls’ race but put in a very consistent race over the 4 laps.

The final race of the day saw the Junior men, Senior men, Masters M30 men, M40 men, M50 men, and Women racing. Seán O’Hara (Roe Valley CC) was the only entry in the Senior men’s race and was pleased to make it around the 7 laps. Travis Harkness (VC Glendale) stormed around the course to take the win in the Junior men’s race with Adam Ewart (Apollo Cycling Team) suffering a broken chain on lap 2 with a long walk back to the tech zone and then a lap without a chain to get him over the line. Caroline Martinez (Chain Reaction Cycles) was the only entry for the Women’s race and correctly predicted she would manage 4 laps in the heat within the time.

In the Masters M30 race, Glenn Kinning (Kinning Cycles Cycling Club) lead from start to finish. This was a final farewell for him in his last M30 race as he starts with the M40s at the cyclo-cross this season. Sean McIntyre (Team Caldwell Cycles) finished second. Dariusz Buchowicz (Team Caldwell Cycles) was lying in third place for 5 laps before Michael Gordon (Un-Attached Ulster) passed him on the final lap. Dariusz had to settle for fourth.

PJ Hynes (Cuchulainn CC) had to work hard in the Masters M40 race to hold off David O’Neill (Inspired Cycling). PJ finished first but was not eligible for the Ulster medal which David collected. Paul Hamilton (Dromara Cycling Club) was third overall but second Ulster rider. Pierce Doheny (Cuchulainn CC) was fourth with Yesten Smith (North Down CC) fifth overall but picked up the bronze medal for third Ulster rider in this category.

Jason Henry (Inspired Cycling) had led the Masters M50 race for 5 laps until Kieran McKenna (Omagh Wheelers Cycling Club) passed him. Kieran then lead for the last 2 laps and took the top step on the podium. Jason had to settle for second with David McKee (VC Glendale) completing the podium.

Well done to all those from Ards Cycling Club who helped to put on the race. Thanks to the Belgian Project for their race commentary and photos. Thanks to Ards and North Down council for the use of the site and to the Last Lap café for providing refreshments. Race report and Commissaire: Martin Grimley
Full results courtesy of Martin Grimley and the Ards CC Time Team…Full results >> http://www.ulsterxc.com/wp-content/uploads/2022/08/UlsterXC_Championships_2022_Ards_Results.htm

The results of “the Peter Bidwell Memorial 2021” in Donore, County Meath (Sat 24 July) Conor Murnane (UCD) took the win ahead of a strong field of top riders! + Youth results 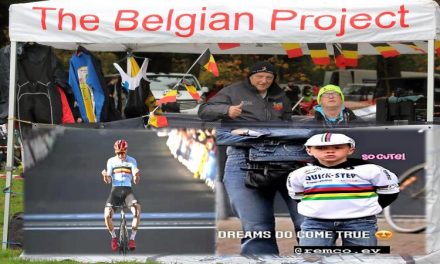 First off all so proud of my country man Remco Evenepoel winning the 2022 World Champs!!! and “What’s on this week?” (Wednesday 28th Sept-Sunday 2nd Oct) + some events now open online for the coming weeks. Sent a poster and all info of your event to dany@belgianproject.cc before deadline on Monday evening prior to your event…it is a free service and it could boost your nrs!!!