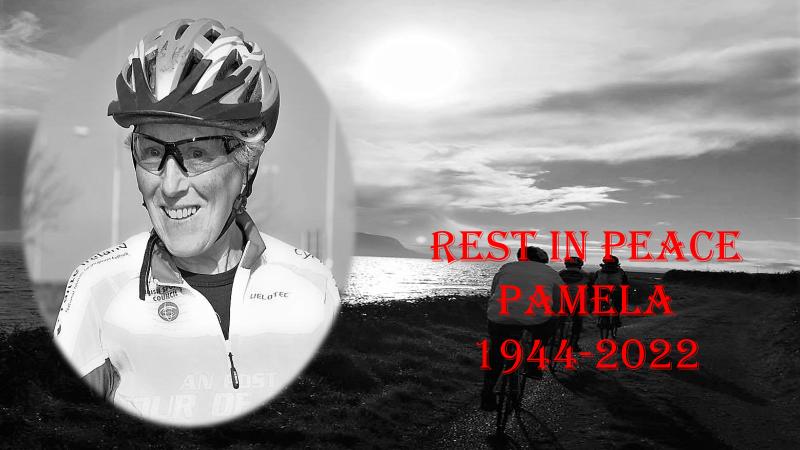 Report courtesy of the “Sligo Champion” in the Independent.ie, photos as indicated

There has been much sadness at the news of the death of cycling enthusiast, Pamela Benson (78) who had been seriously injured in an accident in Collooney at the beginning of October. Pamela, who lived in Ballymote, passed away this morning at Sligo University Hospital where she was being treated following the collision with a car at a roundabout. Pamela had cycled from her home to meet up with her cycling colleagues from the Innisfree Wheelers cycling club. Connacht Cycling in a social media post extended condolences to Pam’s family and friends, especially all her clubmates in Innisfree Wheelers. “It’s with a sad heart that we report this terrible news. Condolences to all her family, friends and fellow club members.”

Gardaí are appealing to any witnesses of this incident or road users who may have video footage, to make this available to them. In particular, any road users in the area between 11.40am – 12pm on Sunday, 2nd October, 2022. Gardaí can be contacted at Sligo Garda Station on 071 915 7000, the Garda Confidential Line 1800 666 111 or any Garda Station. Pic: above from Donal Hackett.

. A native of Dublin, Pam only took up cycling seriously when she retired from nursing in 2007. Her love of cycling saw her complete the 300 mile Dublin-Belfast maracycle and the An Post Tour of Sligo on a number of occasions. She also took part in cycling events in Italy, Vietnam, Nepal and India. Pamela was also a keen runner for many years having taken up the sport at the age of 43 and ran five Dublin marathons and also represented Ireland in cross country master events from the early 1990s to 2016. The retired nurse worked for many years in England and nursed the late physicist, Stephen Hawking in Cambridge for a number of years after she graduated from Trinity College, Dublin in the 1960s. The late Ms Benson also worked in the Beaumont Hospital in Dublin. She moved to Ballymote to retire in 2006 but worked at Sligo General Hospital for a year before finally retiring in 2007.She got involved in local groups including the local heritage group.

Trek-Segafredo has cleaned up the Italian races this weekend!! After yesterday’s huzare stunt of Jasper Stuyven in the Men’s Milan-San Remo, now Italian Champion Elisa Longo Borghini wins with a solo the women’s “Trofeo Alfredo Binda” in Lombardy