The Cycling |Ulster 2022 AGM was held today (Sat 22nd Oct) in the Glenavon Hotel (Cookstown Co-Tyrone) An interesting afternoon we had, and well deserved awards been handed over to “Club of the Year” winners Island Wheelers, and “Volunteer of the Year” Claire Young!! We also had a very intense “Question & Answer” session at the end, with special guest from Cycling Ireland’s CEO Matt McKerrow… 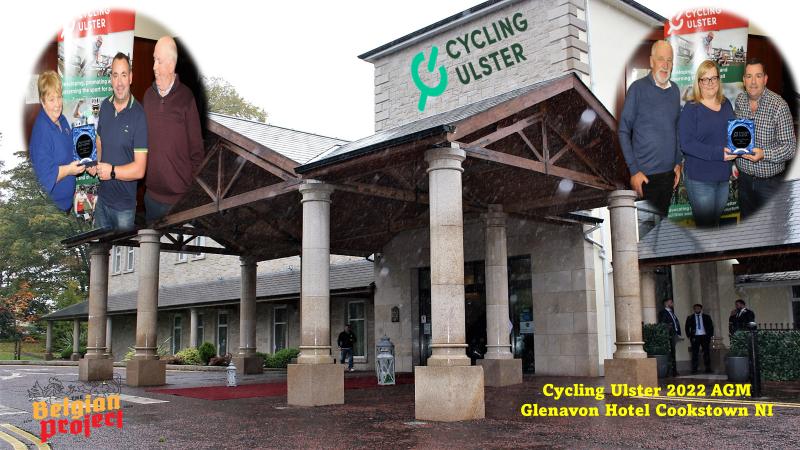 Cycling Ulster had again a great year, the finances are strong and healthy, a membership of 6672 with 123 clubs involved, and many projects has been more than successful, the Accredited Marshal scheme as one of them (300 marshals already qualified!!) and will be intensified in 2023 with more courses and classes for organising clubs in the North!!

The attendance was on the low size, but the people who make things happen been present (15 CU members, 7 CU executive board members, and Cycling Ireland’s Claire Young, Matt McKerrow and Carl Fullerton (nominated for the CI president in 2 weeks time) as special guests. But hey…there was a lot of food left because the low nrs, and we all got a “doggie bag” to take something home…what I don’t understand is that a lot of social media keyboard warriors not showing up…as it is the only time in the year we can have our opinion heard with a view for a change or improving our beloved sport…

Carl Fullerton with his lovely wife Eileen, and CU Chairman Tommy McCague above…Carl is nominated for CI president and hereby I would like to ask all CU members to attend if you have a free day, not to far driving and let your vote count!! The CI AGM will be held in Monaghan on Saturday the 5th of November … Register of attendance is needed and can be done on https://eventmaster.ie/event/plJMIvyTyo and closes the 31st October (12pm) He has my vote for sure, as Carl is a genuine and honest Donegal man, in the sport for a long time, and after his Eileen, cycling his second biggest love, and also being seen on the factory floor so to speak at all corners of the land…

So pleased to see Claire Young get the accolade she so deserves…what she does for the women in the sport is amazing and Claire is now nominated for the secretary post in CI…she has no opposition and should be our new secretary come 5th November!! Claire had a executive position in CU in the past, and has a vast experience in such matters…We wish her good luck, and well done with your CU Volunteer of the Year 2022 award!! (Tommy Lamb and Tommy Mc Cague doing the honours)

Island Wheelers receiving the “CU Club of the Year” award and represented by Gary Rafferty and James Mc Laughlin today…Marian Lamb of the CU executive doing the honours…Well done Island Wheelers, and so deserved, as so much open events get organised by the Dungannon Club….Note: They will be the host of the RR Nationals in 2023…a massive undertaking which they certainly can bring to a success!!

I spotted Matt on his knees and couldn’t resist to take a wee sneaky shot, was he asking for help from above?..lol..To be fair to him, he had hard questions to answer, some he could, some others he couldn’t due to legal reasons, he admitted mistakes has been made, and the federation has to act now…but he demands some respect for facing the members, many wouldn’t and hide! Here a message from CI below>>

And to end a few more shots I took, very proud of our Cycling Ulster, and a big thanks for supporting the BP in such positive way for the last decade…it makes such difference, regards Dany B

“THE BEST OUT OF THE BELGIAN PROJECT MEETS…” PART 4: Having a pint and a bit of craic with Gerry Beggs (Para-cycling Ireland & Banbridge CC)

The Belgian Project will adapt to the new normal…we just don’t know yet how it will look like…Have a safe and Healthy 2021 and hope to see you all soon!