It was wet, and muddy at the Manor….after all it’s Cyclo-cross!! The Florida Manor CX hosted by Killinchy CC as round 3 of the Cycling Ulster CX league had it all!! Another beauty of venue hidden in the Strangford Lough area in Co-Down (Sun 23rd Oct)…the results and photos >>> 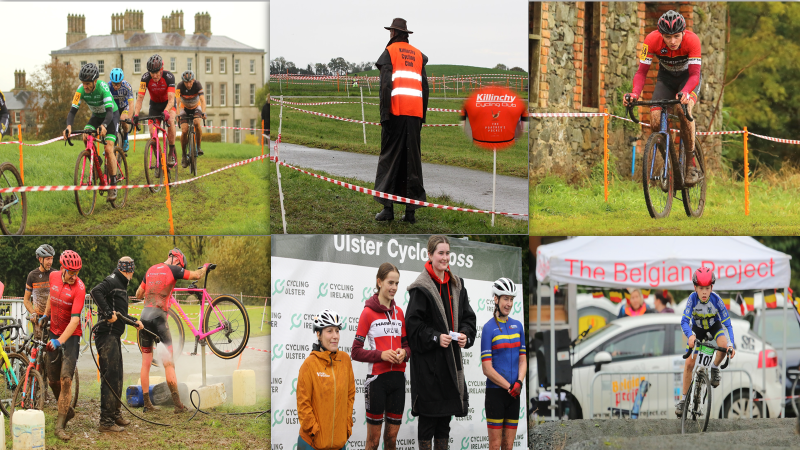 Ulster Cyclo-cross Round 3 – 2022 – Killinchy CC – Report
Round 3 of the Ulster Cyclo-cross series saw a return to Florida Manor in Killincy, County Down on Sunday 23 October 2022. This is the second year that Killinchy Cycling Club has been granted access to use the site. On site is a 17th Century mansion which has been restored with additional courtyards and formal gardens. There is a car park beside the main fields which also has a gravel BMX track. The youth races centered around the BMX track. The main course weaved its way around the main field making great use of the off camber sections. The weather in the lead up to the race had been very wet. There was plenty of mud on site. The weather on the day started off dry but there were showers during the day. We were missing some regulars this week as they were racing over at Falkirk at the British National Trophy Round 2. All races started and finished on the wide tarmac section. The first race of the day was for the Under 6s. The seven young riders (5 boys and 2 girls) had two laps of the short circuit which took them over the BMX humps.

The Under 8s used a similar course but they had to go over all 3 sets of BMX humps. Taking the win after 3 laps was Conor McGahan (Square Wheels) his third win from three rounds. James Kavanagh (Lakeland) was second with Thomas Crymble (Lisburn BMX Club) third. Jack Corey (Apollo Cycling Team) celebrated his 6th birthday today and finished 4th. In the girls’ race Sophia Campbell (Phoenix CC) got her second win of the series. Eabha Connolly (Square Wheels) was second with Ríonach Campbell (Square Wheels) third. The Under 10’s course included a section down to the gravel road and back up through the stone pillars, up the tricky grass slope before turning onto the finish straight. Jack McGahan (Square Wheels) got his third win from three rounds in the 5 lap boys’ race with Leo Gallagher (Shelbourne/Orchard CC) second and Cahir Hughes (Square Wheels) third. Aoife Campbell (Square Wheels) was first girl, her third win of the series, and she finished just behind Jack McGahan. Second girl was Fiadh Craig (VC Glendale & Photo above) with Amelia Finnegan (Apollo Cycling Team) third and Lucy Reynolds (Un-Attached Ulster) was fourth.

The Under 12s used the same course as the Under 10s but they had 9 laps to complete. In the boys’ race, Eunan Campbell (Square Wheels) took his third win from three rounds. Rory McCool (Square Wheels) was second with Kealan Doherty (Foyle CC) third. Ava Baker (Breffni Wheelers) was another rider who has now completed a hat-trick of wins when she won the girls’ race. Skye Spence (Shimna Wheelers Cycling Club) was second with Carmen Buchowicz (Team Caldwell Cycles) completing the podium.

The Under 14s, Under 16s and Women lined up for their races on the full course. The Under 16 boys started first with the Under 14 boys going next, the Women, Under 16 girls then the Under 14 girls. In the 4 lap Under 14 boys’ race it was Caleb McGreevy (VC Glendale) who got his hat-trick of wins now in the series. Caleb finished well ahead of Jamie Rockett (Ards CC) with Austin Henry (Inspired Cycling) third. Among the girls it was Emer Heverin (Kinning Cycles Cycling Club) who took the win, her first for the series. Clodagh Quigley (Foyle CC) was second with Maeve McCool (Square Wheels) picking up the bronze medal for this age category. The Under 16 boys’ race was an exciting one with Cameron Henry (Inspired Cycling) and Curtis McKee (Scott Bright Motor Group) wheel to wheel until the final lap when Cameron crossed the line a few seconds ahead of Curtis. Harry Hobbs (VC Glendale) was third. There were only two entries in the Under 16 girls’ race. Aisha Gannon (Breffni Wheelers & photo below) finished well ahead of Elisa Sunderland (Lisburn BMX Club).

The next race to line up was the Men’s A’ race. This race attraced 25 riders. Oisin Ferrity (Island Wheelers & photo above) set out his mission on lap one and continued to increase his lead over his nearest rival, Alan Bingham (Newry Wheelers CC). Oisin finished around 50 seconds ahead of Alan. Graham Boyd (McConvey Cycles) finished third. Des Woods (Newry Wheelers CC) was fourth and picked up the first unplaced M50 prize, holding off Jason Henry (Inspired Cycling) who finished 6th and was in contest for the same prize. Barry Kellett (Dromara Cycling Club) made his return to cyclo-cross with a great 6th place and picking up first unplaced M40. Odhran Doogan (Team Caldwell Cycles) picked up the first unplaced Espoir prize with Christopher McCann (Banbridge CC) getting the first unplaced M60 prize. There weren’t enough teams for a team prize…

The final race of the day was for the Men’s cyclo-cross B’ race riders and the mountain bike support race. Leading from start to finish was Enda Baker (Breffni Wheelers) with James McCourt (Island Wheelers) finishing second and Eamon Loney (Un-Attached Ulster) third. All three are now obliged to race in the Men’s A’ race for the remainder of the season. Course designer Scott Maitland (Killinchy Cycling Club) finished fourth with Peter Campbell (Phoenix CC) fifth and William Boyd (McConvey Cycles) sixth. In the mountain bike support race Paul Beattie took the win ahead of Jonathan Taylor (North Down CC) with Gerard Curran (Tir Chonaill Gap CC) third.

A massive thanks to the large squad of volunteers from Killinchy Cycling Club for hosting this event. A beautiful venue (thanks to the landowners!) and a good, technically challenging course. The next round will be held by Breffni Wheelers at a new venue in County Cavan, Castle Saunderson with its backdrop of the abandoned castle. See details on http://www.ulstercyclocross.com. >> Commissaires: Jim Adams and Martin Grimley 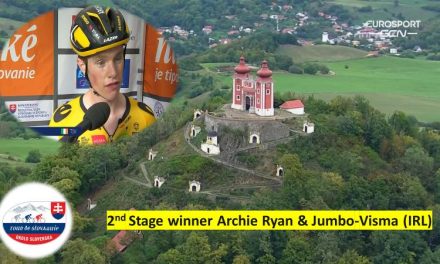 His first week as neo-pro (promoted from the development team) with World Tour Pro Team Jumbo-Visma, and bingo…Archie Ryan takes the second stage of the Tour of Slovakia leaving some big names behind him!! So well done Archie!!

13-year-old youth cycling talent Karl Rocket (Ards CC) will cycle 100 miles (150km) in aid of “Macmillan Cancer Support” in May…please help with a donation if you can!