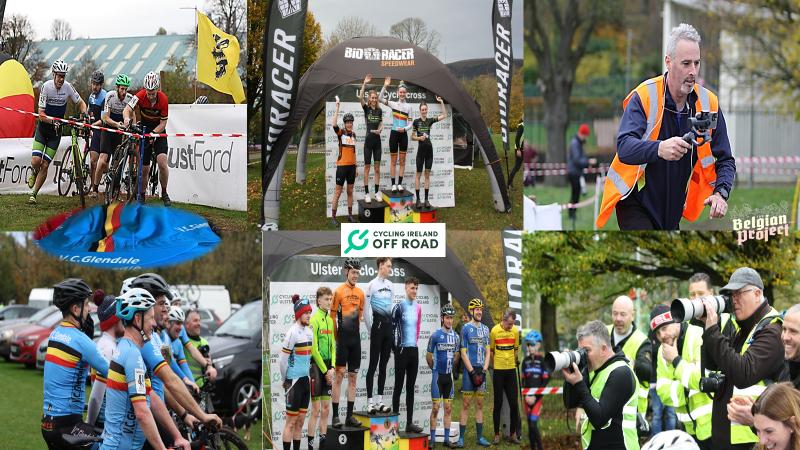 Round 6 of the 2022 Ulster Cyclo-cross series took place on Sunday 13 November and was aptly named – “Falling Leaves Grand Prix”. The venue, Falls Park in West Belfast, was resplendent in autumn colours. There were plenty of leaves to clear! Host club VC Glendale last ran a CX race in the park back in 2019. A big thanks to Belfast City Council for permission and to the park wardens for their support. The event attracted over 200 competitors who found the park transformed into a top quality cyclo-cross venue. The colour of the club’s kit is based on the Belgium team and the park was adorned with Belgium flags. The course benefits from the long, straight tarmac avenue which was used by all riders. The avenue was lined with banners, the music was playing, the racing was exciting. The temperature was very mild with no rain all day.

All courses used the small grass area to the left of the avenue. The Under 6s had a short loop in this area. The Under 8s, 10s and 12s had longer loops. The older categories used the left hand grass area to line themselves up to cross the avenue to head out to the main course. The main course had the iconic steps, built just for the race, as well as a great course in the upper part of the park. The return leg took the riders down the tree lined side of the park on the opposite side of the main parking area, over the boards and back onto the avenue for the finish line sprint.

The first race of the day was, as usual, the Under 6s fun race. There were 10 young riders on the start line who had 2 laps to complete. Their reward, a goodie bag at the finish line.

The Under 12’s had to complete 11 laps of a short circuit. Eunan Campbell (Square Wheels) lead from start to finish in the boys’ race. Daragh Quigley (Foyle CC) was second with Rory McCool (Square Wheels) third. Eire McCrystal (Bellurgan Wheelers) made her first appearance to the league this year and was chasing Ava Baker (Breffni Wheelers) for 8 laps but managed to finally catch Ava on the final lap. Ava had to settle for second with Skye Spence (Shimna Wheelers Cycling Club) third and Carmen Buchowicz (Team Caldwell Cycles) fourth.

Next up were the Under 14s, Under 16s and Women. Rian McCrystal (Bellurgan Wheelers) didn’t have as hard a time as his sister in the earlier race when he lead from start to finish on his debut to this year’s series. Rian’s win broke the run of wins that Caleb McGreevy (VC Glendale) had this season, leaving Caleb in second place at this round. Josh McClune (Team Madigan C.C.) completed the podium with his third place. In the U14 girls’ race Emer Heverin (Kinning Cycles Cycling Club) dominated the race finishing well clear of Aoife Craig (VC Glendale). Clodagh Quigley (Foyle CC) took third place.

Conor Murphy (Rostrevor Mountain Bike Club) lead the Under 16 boys’ race from start to finish. The big battle was behind him for second place between Curtis McKee (Scott Bright Motor Group) and Cameron Henry (Inspired Cycling) who kept together for the whole race with Curtis beating Cameron on the sprint finish. Aliyah Rafferty (Island Wheelers) picked up her second win of the series in the Under 16 girls’ race. Aliyah beat current league leader Aisha Gannon (Breffni Wheelers) with Aoibhinn Sharkey (VC Glendale) picking up her first podium position on the third step.

The next race on the cards was the Men’s A’ race. Dean Harvey, currently with Spellman-Dublin Port, but formerly with the host club, put on another incredible ride to take the win over the 7 laps much to the delight of the spectators. Darnell Moore (Team Caldwell Cycles) finised second with Darren Rafferty (Un-Attached Ulster) winning the battle for third place against Curtis Neill (Carn Wheelers).

The final race of the day was for the Men’s B race and the mountain bike men’s support race. Both were held over 5 laps. David McKee (VC Glendale) has a reputation of slipping into the Men’s B’ race seeking glory and he did just that when he took the win. William Boyd (McConvey Cycles) finished second with Enda McLoughlin (Bottecchia Racing Club) taking third place. All three are now obliged to race in the A’ race for the remainder of the season. Dariusz Buchowicz (Team Caldwell Cycles) finished fourth with Darren McCann (Dromara Cycling Club) fifth and Jon Hilditch (Ballymena Road Club) sixth.

A massive thanks to all the hardworking volunteers from VC Glendale for putting on a fabulous race. The next round will be in two weeks time at Ballymena. Next week is the first round of the inaugural National Cyclo-cross Series which will be held in Westport. Commissaires: Jim Adams, Liz Roche and Martin Grimley (author report)

Standings after 6 of the 8th rounds: https://ulstercyclocross.com/wp/wp-content/uploads/2022/11/Ulster_Cyclo-cross_League_2022.htm

Junior Kaia Schmid of the LUX Cycling team (USA) Wins on European Debut the first stage of “the Ras Na mBann 2021” Plenty of Irish girls in contention at the same time as the winner!! The results (Wednesday 8th September)

Well..that’s it for the year 2021…Hello, 2022!! A very happy and healthy New Year to all our readers and followers…We will start the year with a visit to the *Mc Crystal Cycling Track* in Jenkinstown for the final rounds of “the Big Red Cloud League” and “The Leinster CX league” (1st Jan 2022) +last 2 days entry for the Nationals in Armagh

The entries of the 2021 Irish Youth Track Championship at the Tommy Givan Memorial Track, Orangefield, Belfast promoted by the Ulster Track Commission and Cycling Ireland (Tomorrow Sat 24th July 10.30 am)