A song for Dr. Fred…The Cathedral CX (Final round Ulster CX league) in the city of Armagh, and promoted by Square Wheels got unexpected entertainment when Johnny Mc Cabe took the microphone and broke into a song about Dr.Fred Macsorley MBE who was racing in the B-race!! Just one of this magic moments you never forget…(Sunday 4th Dec) 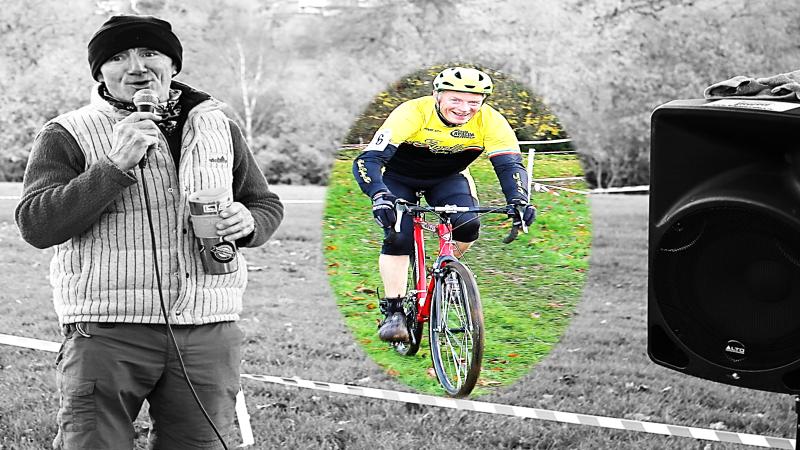 The 8th and final round of the 2022 Ulster Cyclo-cross series took place on Sunday 4 December at the beautiful Palace Demesne in Armagh. Host club Square Wheels had ran the National Cyclo-cross Championships at this venue back in January 2022. Back in January the course had suffered from lots of wet weather making the course difficult to ride. For this event, however, the course was in great condition with little mud meaning the pit crews were largely idle all day. The weather was kind to us with only a short, light shower in the middle of the day. There was lots of sunshine but little heat. When the wind did pick up it was bitterly cold.

As before, the youth races (Under 6s to Under 12s) took place within the garden area of the former bishop’s palace (built in 1770). The start and finish lines had been moved from previous years to nearer the gate to the main park. The first race of the day was for the Under 6s. The 8 young riders had 2 laps of a short circuit to complete. The club had provided festive themed goodie bags for youth categories up to Under 12s.

Next up were the Under 10s and they had 3 laps to complete of their course. Jack McGahan (Square Wheels) won the boys’ race with Jake McKee (VC Glendale) second and Cahir Hughes (Square Wheels) third. Jack and Jake finished the series first and third respectively with Leo Gallagher (Shelbourne/Orchard CC) taking second in the overall series. Aoife Campbell (Square Wheels) was the first across the line of all the riders, finishing around 30 seconds ahead of Jack McGahan on a course that really suited her. Amelia Finnegan (Apollo Cycling Team) was second girl with Ruby Millar (Square Wheels) third. As expected, Aoife won the overall series with Faidh Craig (VC Glendale) taking second overall and Amelia taking third overall.

The Under 12s course was longer than the Under 10s and they had 5 laps to complete. Eunan Campbell (Square Wheels) finishing over 1 minute ahead of Rory McCool (Square Wheels) with Daragh Quigley (Foyle CC) getting third in the boys’ race. These three finished the overall series in the same order. Ava Baker (Breffni Wheelers) and Skye Spence (Shimna Wheelers Cycling Club) were the only two Under 12 girls in the race and this was their finish order. Ava and Skye took first and second respectively in the overall series with Carmen Buchowicz (Team Caldwell Cycles) taking third overall.

For the Under 16 girls, Aliyah Rafferty (Island Wheelers) took the win when she crossed the line ahead of Rhiannon Dolan (Cuchulainn CC). Cara Suckling (VC Glendale) finished third but that was enough to win the overall series. Elisa Sunderland (Lisburn BMX Club) and Aisha Gannon (Breffni Wheelers) finished second and third in the series respectively.

The Women’s race was dominated by the Roche sisters with Stephanie taking the win ahead of Annie (both with Scott Bright Motor Group). Helen White (Stamullen RC) had just returned from the 2022 Masters Cyclo-cross World Championships in Ipswich after finishing 7th in the FV55+ category. Helen then added a third place at the Ulster Cyclo-cross Round 8 to her resumé of cycling achievements. Elena Wallace (Harps CC) finished fourth today and took the first unplaced Junior prize. Caroline Martinez (Chain Reaction Cycles) finished fifth today and took the first unplaced masters prize. Caroline also won the overall series. Stephanie Roche was second and Carly Connolly (Square Wheels) was third in the series.

The next race to line up was the Men’s Cyclo-cross A’ race. They had 7 laps to complete. Darnell Moore (Team Caldwell Cycles) lead the race from start to finish. Graham Boyd (McConvey Cycles) made his way up from 4th to second. Jamie Meehan (Spellman-Dublin Port) was third with David O’Neill (Inspired Cycling) finishing fourth and taking the first unplaced M40 prize. Seth Dunwoody (Shelbourne/Orchard CC) was fifth and took the first unplaced Junior prize. Colm McGarvey (EPIC MTB/Expert Cycles) made his debut to the series and finished sixth, taking the first unplaced M50 prize. Johnny McCabe (Cuchulainn CC) took the M60 prize but then went on to delight the spectators and riders by singing a song about Fred MacSorley while Fred was competing the next race!!

The next race was the Men’s Cyclo-cross B’ race and the mountain bike support race. Host club’s Colm McGahan (photo below) was leading the B’ race for the first 3 laps to great encouragement from the spectators, however he faded for the last two laps allowing Vinny Mort (Dunloy CC) to take the win. Colm finished second with Sean Scullion (Island Wheelers) taking third. Ian Lambden (Lakeside Wheelers Mullingar CC) was fourth with Peter Oliver (The Bike House CC) fifth and Gavin Thompson (Un-Attached Ulster) sixth. Fred MacSorley (Apollo CT) finished 25th under the encouragement from Johnny McCabe!

These events are only possible with a huge effort from the host club. Thanks to all those who gave their time to put on this event. The set up was great! Thanks also to the Armagh, Banbridge and Craigavon local council for allowing the venue to be used and to the Belgian Project for race commentary and photos today. Across the whole series we had over 360 people come along to take part. Thanks to all of them for supporting the series. The overall series prizes will be given out at the Ulster Championships which take place on Sunday 18 December 2022 at Mallusk Playing Fields, hosted by Kinning Cycles. 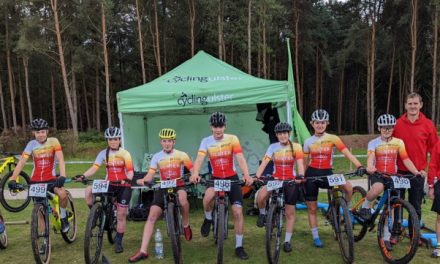 Cycling Ulster has sent 2 teams down (2 boys & 2 girls) to the 2022 “Inter Regional Championships Mountain Bike Cross-country Championships” last weekend (10/11 September) at Cannock Chase (GB) Medals have been taken, and encouraging results overall from our aspiring youngsters made it certainly worthwhile…well done to the riders and back-up staff!! 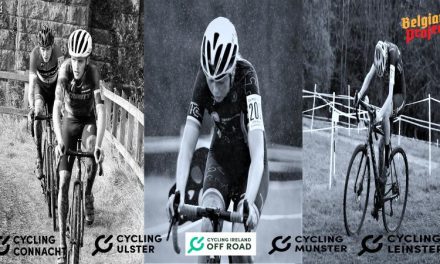 What’s on this weekend CX wise? (Sat 26th-Sun 27th November) CX in each province of Ireland this weekend…please support this events if you can!! 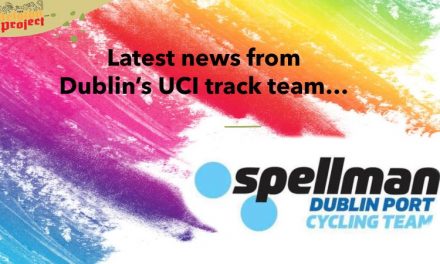 Already well established on road, and off-road in Ireland, the *Spellman-Dublin Port Cycling Team* is also an upcoming “International UCI track team” at European,World and National events!! They had a very successful September with podiums at the Coupe d’France (Lyon) and last weeks “Troféu Internacional Ciutat de Barcelona” both UCI CAT 2 events…the story of their progress >>>