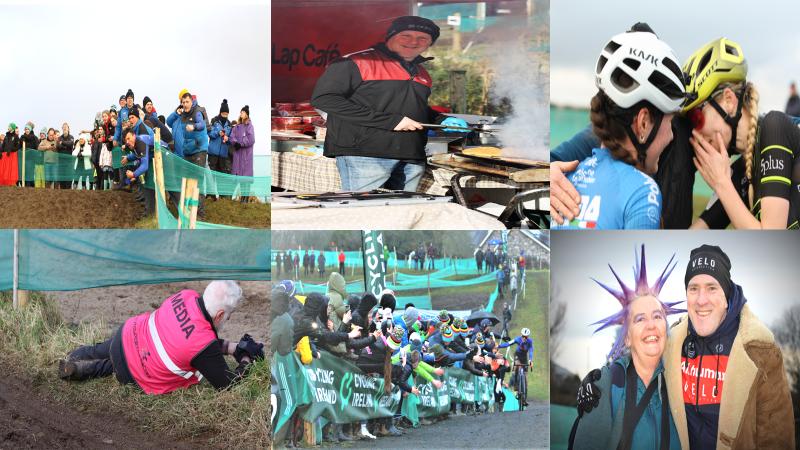 Witty phrases and educated commentary is guaranteed when Paul Joyce is on the mike…I certainly can learn from him…here below his view of the Champs, thank you Paul for this brilliant contribution

(Monday 16th Jan) The washing machines were busy late last night, and this morning. The mud of Bellurgan been washed away as the memories get stored from a National Championship that will live long in many a household.
With the weather playing games over the two days ,questions were asked of a course that was impeccably presented by the brilliance and foresight of Bryan McCrystal . The track been regarded as the best in the country. Ultimately it would be under the conducting baton of Brian ,that a voluntary team of assistants and local helping hands would produce an event worthy of National stature.
Saturdays action was made up of the stars of tomorrow , with all race results going as expected. .. In time the youths that participated will have their time in front of the television cameras, interviews and the plaudits from the ‘Hill ‘all lye in wait.

The focus was always going to be on Sundays action, the live streams that were made available on the various platforms added to the nerves and expectancy , knowing ones performance was going out globally was always in the back of the mind.
All nerves were quickly laid to rest on the Hill. The crowds on the Hill created an atmosphere that gave every rider a new found confidence on every lap, it was as if they were been pulled from the top. The unbiased support and noise, most notably coming from Sliabh Luachra ,and Glendale ,was enough to drown out the noise of cowbells ,and the chainsaw (minus the chain) which was still deemed too dangerous for Barry Rogers .
Martin Grimley was as ever flawless in his operations directing ,the team alongside ensured the day went off with an air of perfection.

The camera lenses were out in force , to think that all our photographers give up their time voluntary ,and that they tend to all their own expenses is not just mind boggling , it needs reviewing.
Sean Rowe, John Hammer, Toby Watson ,The Belgian Project, Fran Hollywood, and the Queen Bee Caroline Kerley ,without you we wouldn’t have the memories in picture form , each and everyone of you ,and indeed anyone that I failed to mention in your craft ,deserve the acclaim for your brilliance and unselfishness, week in, week out .

It was down to the aforementioned to capture all the action, from Johnny McCabe retaining his green jersey in the M60s ,right through to the curtain call of the Cooley mountains stealing the natural day light after a hail shower that added to the occasion.

The M50’s category was the first to produce the drama , despite race favorite and current European Champion Robin Seymour taking the expected win ,it was heartbreak for a very gallant Colm McGarvey as a mechanical scuppered his chance of a podium finish. (photo of Colm below)

The travelling Munster support had plenty to shout about in the Junior race , Liam O’ Brien gave a masterclass , the crowds got to see the talent that is coming through , Oisin Ferrity, and Joseph Mullen are names that will come up time and time again throughout 2023.

Maria Larkin held on her crown in the Womens, albeit after a scare from Hannah McClorey who put in the performance of the day ,a superb effort from Stephanie Roche didn’t go unnoticed, a bronze was the least she deserved .

Grace Young proved why she had the favorite tag for the more mature women , she didn’t disappoint… how wonderful was it to see Helen White make podium ,another popular rider among her peers….. those that climbed on the podium throughout the day earned their place after all they sacrificed through a seasons hard graft.

The support of the chainsaw roaring on the Hill was testimony to the women that we see every week , not always on the podium , some may never hear their name for podium, every one of those girls gave everything they had , every one of them a winner .

The cameras rolled for the final race for the big guns ….who was going to beat Dean Harvey ? .
The answer quite simply =No one!!! The young man is on a different planet , The green jersey could not be on a more deserving ambassador for off road cycling .

There were honorable honest performances from all that finished , as much as I would like to try and mention certain individuals ,it would be easier to commend all that made the Nationals a truly fabulous spectacle .
To all for their kind comments , to the regulars that always acknowledge my presence, I am very grateful.
There may have been green jerseys and podium places for some , without those that finish outside the top positions there would be no winners , the real champions are those that show up at every race and finish with a smile rather than a medal . We all make up a jig saw ,and you are an important piece ….without you we would never be complete.
Lets do it all again real soon.

Full results can be found on http://www.offroadcyclingireland.ie/wordpress/wp-content/uploads/2023/01/Irish_National_Cyclo_cross_championships_2023_Results.htm

Some selected photos to round of the report

Darren Rafferty amazed us in the TT a few days ago (11th) and today at the high end of the race in the World Champs in Leuven (Bel) done it again with a gusty performance!! Darren was involved in the group sprinting for bronze!! (Frid 24th September) Norwegian Per Strand Hagenes won the gold!! The 64th “Shay Elliott Memorial” hosted by Bray Wheelers for A1-2’s and the “Ken Duff Memorial” for A3’s, Juniors, and Ladies was held on Sun 8th May, with finishing on the Glenmalur in Wicklow…Dean Harvey (19) Spellman-Dublin Port, the most marked rider in the elite peloton shook off his rivals in *Lucien Van Impe* style, and upcoming junior star Sam Bolger (Killarney CC) showed how good he is in the Ken Duff!! The first woman was Linda Kelly (Spin the bean Coffee)