The Kerry Group Rás Mumhan is one of Ireland’s premier cycling events. It is run by Killorglin Cycling Club, it takes place in Kerry and west Limerick over the Easter weekend. With Killorglin as its base, it passes through some of the most stunning scenery in Kerry and from the cyclists’ point of view, some of the most demanding terrains. The event has been based in Killorglin since 1998, having been originally run in the 1950s. The race has traditionally attracted the cream of Irish amateur cyclists. Over recent years the event has attracted cyclists from England, Scotland, and Holland. This has added immensely to the competitive nature of the race. The race is organised through a volunteer effort, with members of cycling clubs throughout Kerry, Limerick and beyond supporting the event, in addition to many community groups in the towns through which the races pass.

Usher Irish Road Club is delighted to announce the return of the 52nd Gorey 3 Day which takes place this Easter Weekend, 20th -22nd April 2019.
The 4 stage International Cycling Race is open to A2 & A3 riders and opens with a 103km stage from Blessington to Gorey starting at 12 noon.
Easter Sunday kicks off with a 6.4km Time Trial in Gorey starting at 9 am followed by an 85km road race that afternoon starting at 3 pm.
The final stage is 85km in length departing Gorey at 12 noon and returning back to finish on the outskirts of Blessington.
Further information is available at www.irishroadclub.com with any queries to alicesherratt@gmail.com

Preview courtesy of the Northern Ireland Cycling Federation. A full field. 25 teams of 120 riders. Of these 43 are in the young rider category which, being a race that has always had an ethos of having the best up and coming young riders testing themselves against the more experienced riders, we are delighted about. In the past few years, it’s been overseas teams that have taken the honours. This year we have 8 teams from across the water headed by the UCI Continental registered Ribble team. They bring a local interest however with Cookstown rider Jake Gray.
Spirit Tifosi are back having taken the yellow jersey with them 2 out of the 3 previous years, they have a changed line up but will be up there as always. Pro – Vision return and with Ben Joughin in the team will provide plenty of class. One name to look out for is that of ‘Tanfield’. Riding for the Cleveland team Toby is indeed the younger brother of track world champion Charlie and Katusha pro Harry. That leaves 17 home teams… Caldwell cycles have serious quality in last years runner up and last weeks Wallace Caldwell winner Darnell Moore. Ronan McLaughlin heads up a strong Dan Morrissey team. And one to watch will be the strength of Powerhouse sport, with Lindsay Watson, Xeno Young and Felix English, last here at the tour with Rapha Condor. Add into the mix the experienced riders from Newry, Ballymena, Carn and others and it’s going to be quite an Easter festival of racing!! 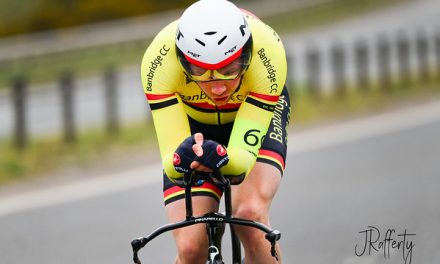 Omagh Wheelers (Tyrone) promotes next weekend a Valentine cycle in aid of the “Air Ambulance Northern Ireland” Love is in the air!!!

Cycling and Family Friendly B&B Akrenbos 101 (near The Muur of Geraardsbergen) is almost ready, All we need is YOU!!! Owner Quinton Van Loggerenberg (Bioracer Motion Bel) shares his unique story of fulfilling a dream.