Cycling Ireland National Road Series (Rd7) The “St.Tiernan Laragh Classic 2019” A windy affair at the top of the Wicklow Gap! 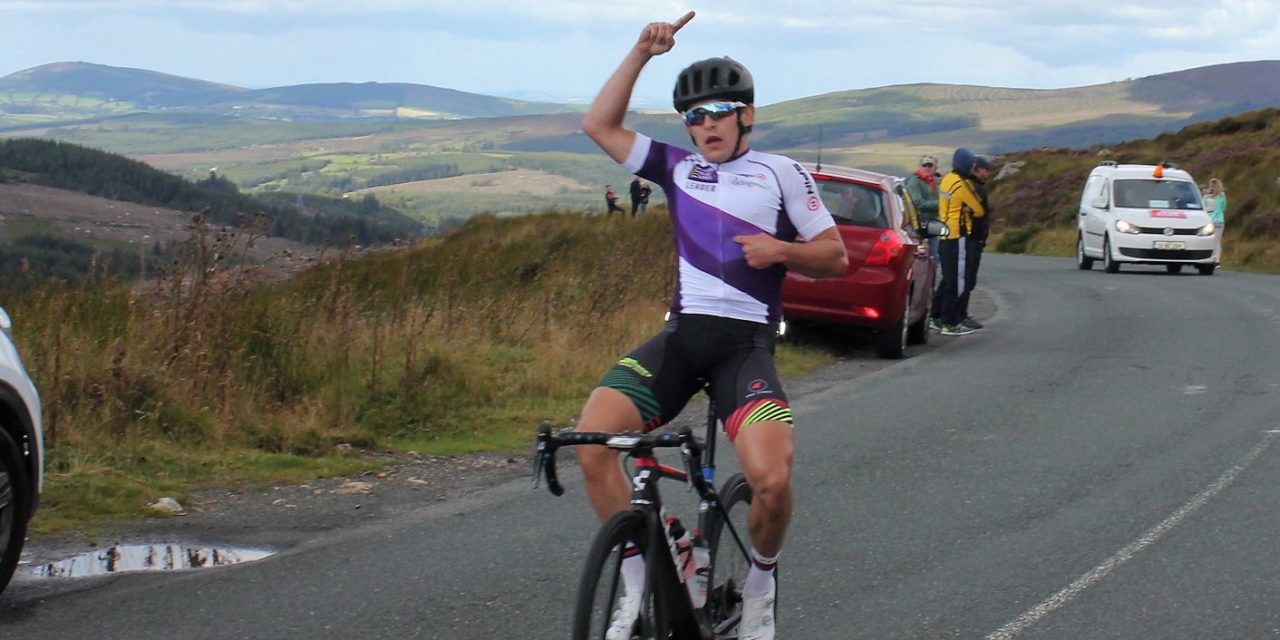 I started my journey early morning in atrocious condition yesterday, high winds and downpours of rain that kept my wipers on full speed and still could see feck all, till I crossed the border and when I hit the M50 the sun came out. Took a wrong turn and ended up the scenic way to Laragh, passing Sally Gap and his famous sheep who played some games with me…ended up giving my lunch to them to be allowed passage..lol. Never mind, made it with plenty of time spare. I was invited by the St Tiernans Club to do the Mc Job and soon the tunes filled the carpark at the sign on in this picturesque village of Laragh, at the foot of the Wicklow Gap, a monster of a mountain with an ascend of 4,5 km to the top. The race started around 10.30 am with the Men Elite (A1-2) first of, quickly followed by the A3 race and as of last of the women elites. A loop was done before they tackled the gap and plenty of time for me to set up my PA system at the top to keep the small crowd informed what happened in the race and encourage the riders at the halfway point. Helped by St Tiernan’s timekeepers who kept me updated as best possible as the reception at the top was not perfect. Jessica Lamb kept me updated with twitter coverages as best possible and the rest I just winged..lol..The wind was blowing heavy, and I shouldn’t complain as it was worse for the riders who still had another 42 km to go after reaching the top and then turn back to tackle the gap again after another climb near the village of Holywood. In total 87 km but very hard kms, as no respite on this roads in the Wicklow Mountains. Conor Hennebry took the win and nearly certain he will win the series in the men section. The A3 race was in memory of Martin Vereker who passed away a few years ago, his wife told me about his life a bit as a cyclist and his beloved club, a tragedy at such young age, my sincere thoughts to this young family. I have no results yet of the A3 race but will add them here when received. The women’s race as last to finish the day with a powerful win of Maire Claffey (UCD) who left the lead group of 4 behind her to take the famous Laragh Cobble Trophy at the reception after. A great thank you to the St Tiernan Club for having me and well done to all involved from the tea ladies (magic spread by the way) to all the riders who braved the winds at the gap.