Feature photo courtesy of Belga Fotos and partly report Sporza.be, with thanks

What a day for Irish Cycling, it was a dream of Sam to achieve this, he had to wait a long time and needed to switch teams end last year to have a fighting chance to achieve his dream. Making sure he had some intermediate sprint points to keep close to Sagan and an opportunity to grab the jersey back at the finish line…AND SAM DID…SO PROUD OF YOU SAMMY B… Here the story of the stage by Sporza… “The wind was present, but not strong and favorable enough. That did not lessen the nervousness in the peloton, on the contrary. The nerve-racking ride had far too many incidents, which were partly caused by all the traffic islands and much more irresponsible street furniture. Roche, Bol, Pogacar, Formolo, G. Martin, and Coquard, among others, studied the asphalt closely, but the many traps ultimately caused a lot of annoyance and not too much physical damage. With the exception of a few feints, it remained mostly windless in the final in the thinned peloton, where the ordered bunch sprint could be picked up. Sunweb seemed to roll out the red carpet for Bol again, but the experienced Morkov took over with all his feeling and did everything he could. Teammate Bennett could not pass up this golden opportunity and did not let the cheese eat his bread anymore. Ewan put the Irishman under pressure but did not get further than second place” 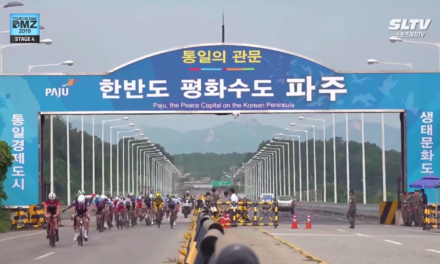 Still, 3 Irish warriors left in the Tour de DMZ in S/Korea after stage 4 and very much on the foreground in the peloton