I dedicate this victory to my team and my wife, said Daniel Martin after his impressive win in the Vuelta (Stage 3)

Daniel Martin (Israel Start-Up Nation) struck the first uphill finish in the Vuelta. In a long sprint, he stayed ahead of Primoz Roglic, who sees Martin approaching in the standings, but who on the other hand took some distance from Carapaz and Mas. Daniel Martin had not won since his Tour stage in 2018, but in this Vuelta, he had shown that his form so late in the season is going well. In the Tour, Martin had not yet sufficiently recovered from a pelvic fracture, but now he seems to be coming through completely. Daniel told the TV audience after the race “I dedicate this victory to my team and my wife” Dan Martin was particularly emotional in his short reaction after his victory “I was close a few times this year. I really wanted to win for my team, because they have always been good for me, unfortunately, it was not possible in the Tour because of that injury, but I was determined to do it here, this victory is partly for the team and partly for my wife, this is the first time that I have won a stage since my twins were born and for me very special” 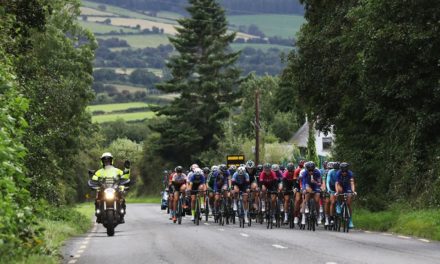