Round 4 of the Ulster CX League 2021…The Omagh CX in Fintona (County Tyrone) yesterday (Sun 7th Nov) A “big thank’s” to all competitors for entertaining us all day and chapeau to Omagh Wheelers and his volunteers!!

Feature photo and some winning photos courtesy of Jerry Rafferty (Armagh), other photos BP media…report and results from Martin Grimley (Ulster off-road commission and chief-comm) with thanks to both

Round 4 of the 2021 Ulster Cyclo-cross series took place on Sunday 7 November at the Ecclesville Centre in Fintona, County Tyrone. This is the third year that host club Omagh Wheelers has run a cyclo-cross race at this site and they continue to develop and improve the course and layout. The center was available to have indoor registration and toilet facilities. The event village was right outside the center with hot food van as well as race start/finish. This year the Under 14s, Under 16s and Seniors started on the gravel beside the main building. They then went through the wooden gate and out onto the course. The recent rains had left the course soggy with the ‘going’ described as heavy. As per previous years, the course took in the main grass arena used for equestrian events as well as the woods nearby. The course made great use of the off-camber features in the middle of the park – a great area for the spectators. The weather on race day was dry and bright with spells of sunshine. Full results on: https://ulstercyclocross.com/wp/wp-content/uploads/2021/11/Ulster_Cyclo_cross_2021_Round_4_Omagh_Wheelers_Results.htm

The first race of the day was for the Under 6s. Eight young riders (4 boys and 4 girls) lined up for 2 laps of the short course. At the end was a goodie bag sponsored by Spar. These goodie bags were available to all youth up to Under 12s. The Under 8s used the same course as the Under 6s but had 5 laps to complete. The Cunningham family took advantage of a weekend visiting local relatives to attend a cyclocross race. Benjamin Cunningham (Orwell Wheelers Cycling Club) took full control of the Under 8 boys’ race to take a decisive victory. This was Benjamin’s third win in the series. Elijah McClintock (Lisburn BMX Club) finished second with Noah Mitchell (Square Wheels) finishing third. In the girl’s race, Ruby Millar (Square Wheels) has made it four wins out of four rounds. Fiadh Craig (VC Glendale) finished second with Sophia Campbell (Phoenix CC) crossing the line in third place.

The Under 10s course was longer than the Under 8s and took in a loop around the park, a climb up the embankment before heading down the finishing straight for 5 laps. There was a crash at the start line with Billy Lord (Breffni Wheelers) coming out the worse when all riders were on their feet. At the front of the race, Daragh Quigley (Foyle CC) made this his fourth win out of four rounds in the boys’ race. Jack McGahan (Square Wheels) was second with Ewan Ewart (Belfast City BMX Club) third. Aoife Campbell (Square Wheels) is another rider on fire this season as she took her fourth win from four rounds. Grace Foley (Yeats Country Cycling Club) was second with Abbie Kinning (Kinning Cycles Cycling Club) third and Emily McClintock (Lisburn BMX Club) fourth.

The Under 12 used the same course as the Under 10s but they had 8 laps to complete. Josh McClune (Team Madigan C.C.) took a tumble on the start line but the adrenaline kicked in and he jumped back on his bike and took off chasing the others. By the end of lap 3, Josh had taken over the lead and held it to the line. Eunan Campbell (Square Wheels) finished second with James Cunningham (Orwell Wheelers Cycling Club) third. In the girls’ race Aoife Craig (VC Glendale) took the chequered flag when she finished ahead of series leader Clodagh Quigley (Foyle CC). Aoife Kellett (Dromara Cycling Club) completed the podium for the girls.

All races then moved to the full course. This took in the forest section as well as the challenging off-camber sections in the main park. After a short break for course practice the Under 14, Under 16 and women lined up to race. The Under 14s and Under 16s were aiming for a 30-minute race with the Women aiming for a 45-minute race. In the Under 14s race Curtis McKee (VC Glendale) made his fourth win out of four rounds with another impressive display of racing. James Armstrong (Dromara Cycling Club) finished second with Adam Ward (VC Glendale) third. Emer Heverin (Kinning Cycles Cycling Club) took her third win of the series when she finished ahead of last week’s winner Aisha Gannon (Breffni Wheelers). Cara Suckling (VC Glendale) and Elisa Sunderland (Lisburn BMX Club) finished third and fourth respectively.

The Under 16 boys’ race had an exciting battle between Seth Dunwoody (Shelbourne/Orchard CC) and Conor Murphy (Rostrevor Mountain Bike Club). Both riders stuck to each other for the whole race with Seth taking the win just ahead of Conor. Samuel Coleman (Shelbourne/Orchard CC) finished third with fellow club mate Daniel Scott finishing fourth. There were only two entries in the Under 16 girls’ race with Aine Doherty (VC Glendale) getting her second win of the series when she finished ahead of last week’s winner Lucy Brown (Phoenix CC). In the Women’s race, it was series leader Judith Russell (Phoenix CC) who crossed the line first with Katie Reilly (Orwell Wheelers Cycling Club) second and relative newcomer to the sport – Helen McParland (Phoenix CC) taking third. The first unplaced master went to Heather Foley (Yeats Country Cycling Club) who finished fourth.

After another break for practice, the Men’s cyclo-cross A’ race lined up. All eyes were on the front three with Christopher McGlinchey (Spectra Wiggle p/b Vitus), Darnell Moore (Team Caldwell Cycles), and Darragh McCarter (Spellman-Dublin Port) battling it out. After a collision near the pits which knocked Christopher out of the close battle, it was a sprint finish with Darragh taking the win ahead of Darnell. Christopher finished third with Alan Bingham (Newry Wheelers CC) finishing fourth and taking the first unplaced M40 prize. Glenn Kinning (Kinning Cycles Cycling Club) finished fifth with sixth place Oisin Ferrity (Island Wheelers) taking the unplaced Junior prize. Des Woods (Newry Wheelers CC) took the unplaced M50 prize. Newry Wheelers won the team prize ahead of Dromara Cycling Club and Square Wheels when Barry Convery (Newry Wheelers CC) joined Alan and Des at the finish

The last race of the day was the Men’s cyclo-cross B’ race. Colin Deane (Unattached) lead the 5 lap race for the first 2 laps before a mechanical took him out of the race. Ivan Reid (Team Caldwell Cycles) took over the lead and held it to the line. Mark McClure (Team Caldwell Cycles) finished second with Edward Kearney (Phoenix CC) finishing third. These three riders are now promoted to the A’ race. Christopher McCann (Banbridge CC), Daire Nulty (Breffni Wheelers), and James Wilson (Apollo Cycling Team) finished fourth, fifth and sixth respectively.

“Many thanks to Oliver Logan and his army of volunteers from Omagh Wheelers for hosting today’s event. Thanks to Dany Blondeel from the Belgian Project for doing race commentary and to all the sponsors who supported the race. The next round will take place at Windmill Park in Dungannon hosted by Island Wheelers. See details on www.ulstercyclocross.com, yours in sport Martin Grimley. (Comm’s on Duty Martin and Jim Adams (pit)

This weekend we see 2 Grand Prix’s on Ulsters roads..The Hilltown GP in Co-Down (A1-A2-A3-A4) and the Emyvale GP in Monaghan (Senior, Youth, Masters and Women’s Racing) 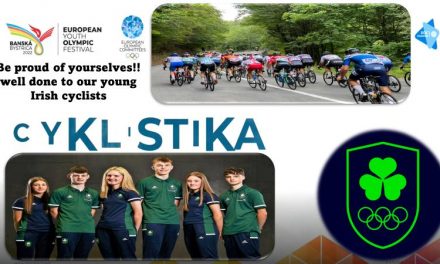 They have done us proud, by giving it all…Well done Mya, Aine, Aliyah, Sam, Seth, and Patrick this week at the European Youth Olympic Festival in Slovakia, this experience will be very valuable in the future!! The Road Race results (Thursday 28th July) >>