Foreword Dany: ” A few years ago Frank O’Leary told me to have a closer look at Cian, well I am happy that I did!! In 2018 Cian entered the BP selection pool, he start impressing me, and at the Nationals in Sligo that year I was able to award him with a bursary and the BP Medal of excellence! Irish National team call-ups followed in the following years, in 2020 Cian joined the Spelman-Dublin, and this move provided track experience at a high level. 2021 saw him racing abroad with the Willebrord Wil Vooruit Elite/Beloften Cycling Team, a top Dutch Under 23/ Elite amateur team, this to get more experience in hard and long races in the continent…with a bronze medal in the National TT as one of his highlights in 2021…The call came for him to become a pro…So happy and proud for Cian, he is a grateful and pleasant lad, the right character, and a team worker…it shows to all youngsters that it is possible, being patience the key. Good luck this year Cian to you and your teammates, EvoPro will not regret their choice!!“

Cian told the Belgian Project: “My first race was the National Championships 2009 in Arklow, Wicklow. I was dropped from the gun and since that day I’ve been working on improving as a cyclist. When setbacks hit throughout the years it didn’t tend to bother me much. I was just enjoying being involved and winning races definitely wasn’t my main motivation. Setting small goals like a top 10 helped me keep moving. My first experience of a result came as a shock. The 2012 Brendan Campbell Memorial youth race. There was a lot of cat and mouse in that race and it played into my hands as I could just about hang on. We headed into the final km of the race as a group of 10 or so. 200m to the line and everyone was still looking at each other, playing games. I just decided to go for it, with nothing to lose. Caught them by surprise. I put my head down and sprinted to the victory. A lot changed for me that day. I realised for the first time that the strongest rider doesn’t always win.  Since then I tried to always find ways to get ahead of the competition, as my legs never really showed up until I turned 17/18. Coincidently, the next time I won a road race was in 2018 (19 years old) as an A1 in that exact same Brendan Campbell Memorial.

“In 2021, I focused on exposure to racing abroad and I was lucky enough to join a dutch team called Willebrord Wil Vooruit (WWV). They have a long history of developing cyclists and I thought it was a good choice to accept a place with them. Due to covid, I didn’t get to race abroad as much as I’d have liked but I had my first taste of UCI level in 2021 and ended up with 60th place in a popular race in the Netherlands; Dorpenomloop Rucphen. 195km with 130 starters in the race consisting of 10 professional teams. WWV was one of approx 3 amateur teams invited to compete. I was on my own in the final lap surrounded by big teams like Sport Vlaanderen. This result came after a DNF in a UCI race in France, a shock to the system of the level these guys operate at. Positioning is probably the most important thing and is hard to get right with no space on the road. I took what I had learned with me into the Dorpenomloop Rucphen and came away with a result I was pleased with but hungry for more“

“I ended the season with 3rd in the National Time Trial U23 Championship. My first National Medal on the road. I really wanted a result in this and put a lot of effort into making sure everything went right on the day. I really enjoy time trialing now as it clicks with that part of my brain that’s always looking for efficiency. I’ve been racing for over 12 years, and 2021 was the year I learned the most. Just racing on the continent, it throws you out of that comfort zone. There were times when I felt completely new to the bike. I find that the level is really high in Ireland, but the things like large pelotons, limited road space, and riding in the wind aren’t really factors you learn. You have to get abroad for that. I’m really looking forward to continuing my progression with Evo Pro“

“Just want to say thanks to a few people over the years who helped me.
Mark Murphy and Mark Loughran of Bray Wheelers where I started cycling at age 9.
Michael Considine a mentor who brought me out cycling every week as a youth. Frank O’ Leary was my first coach and taught me so much about self-discipline and training. Everyone in South East Road Club who supported me over the years. My coach since 2019 is Thomas Fallon. And of course my parents John and Lisa. There are so many more people to thank, you know who you are”….Cian ended the conversation with us 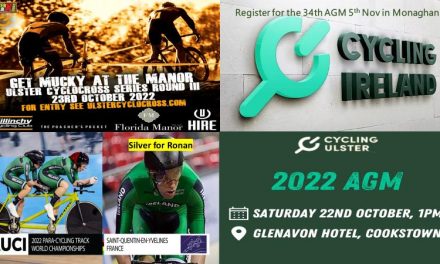 Some news flashes of Friday 21st Oct!! Last day of entry for the “Get Mucky At The Manor” CX in Killinchy Co-Down on Sunday, Cycling Ulster and Cycling Ireland AGM news, and Ronan Grimes got silver in Paris, + other results, while Katie-George Dunlevy (with pilot Eve Mc Crystal) has to withdrawn due to sickness!! 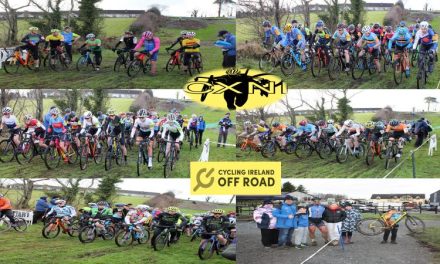 They came to Portadown Armagh from as far as the Cork area for the last round (4) of the 2022-2023 Irish National CX series on Sat 7th Jan!! We witnessed some great battles, as overall standings still needed to be decided, and a general repetition for the big one this weekend (National CX Champs) in Co-Louth (Mc Crystal Track) All results and final standings within>>

The Queen Stage (Final) of the “International Tour of the North 2019″ or let we called it ” The Battle of Torr Head” from now on!