I was sad to hear of the death of Oliver today, he was a supporter of the Belgian Project since the start in 2008, and a great believer of youth development in his beloved sport. I met him for the first time when I was a commissaire in the Tour of Ulster, Oliver was my driver, I remember we had to stop the car as a crash happened in front of us, we stayed with the wounded rider till the ambulance arrived, but by that time the race was gone…the traffic prevented us to get back to the cavalcade, Oliver felt guilty that we couldn’t reach the race again, but even Michael Schumacher would not have managed, as the traffic was too much on the small roads of Tyrone and Fermanagh…we have been friends since, and so sorry for Carmel his loving wife and his daughter Carmelanne, both always with him at the races. I certainly will miss him, and so will our cycling fraternity…here below is a tribute from our federation Cycling Ulster…Rest in peace Oliver. Funeral leaving his late residence on Tuesday 15th March at 12.30 pm for 1.00 pm Requiem Mass in Holy Trinity Church Cookstown, with interment afterward in St.Lauran’s cemetery.

Cycling Ulster is deeply saddened to learn of the passing of its long-time Treasurer, Oliver Hunter.
Oliver was devoted to the development of cycling and spent decades promoting the sport at club and provincial levels.
Oliver first became involved in the sport when he joined Harps CC in Cookstown and represented the club in the competition in the 1950s and 1960s during a time when cycle racing consisted mostly of grass track events. He was later involved in the Flogas Harps CC in the late 1980s. Oliver joined Bann Valley Road Club in the early 1990s and immediately became involved in the club committee, helping to organize all aspects of club activities including the annual Bann Valley Classic and the club league as well as leisure and social events. At the provincial level, he was a member of the Cycling Ulster Executive for thirty years, taking on the role of Treasurer and managing the organisation’s finances which has enabled Cycling Ulster to be in a much stronger position today than it was at the time when he was first elected.
Oliver was always keen to support the growth of the sport at all levels and the various disciplines, particularly at the youth level, and in his role as Treasurer, he was a strong voice for ensuring funding was used to provide more opportunities for young cyclists to develop and improve. As a member of the Ulster Cycle Promotions Committee, he was at the forefront of organising national and international races in the province including the Tour of Ulster, the City Centre Criterium Series, the Belfast-Dublin-Belfast 2-Day, and All Ireland Championships. This provided riders in the province with the opportunity to compete in international events on the home scene and Oliver was in his element at seeing the local riders challenging those from abroad.
Oliver’s passion for the sport also extended to his wife, Carmel, and daughter Carmelanne who supported him during his immense contribution at the local and provincial levels. Carmelanne served alongside her father for several years on the Cycling Ulster Executive in the position of Secretary.
Oliver continued to be significantly involved in the sport up until the pandemic and his recent illness which saw him step down from the Cycling Ulster Executive in 2021.
On behalf of its members, the Cycling Ulster Executive extends its deepest condolences to Oliver’s wife, Carmel, daughter Carmelanne, his wider family circle, and friends on the death of a true gentleman. 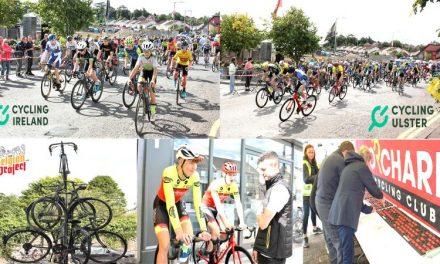 The “2022 Youth Irish National Championships” were hosted by Orchard CC in the villages of Hamiltonsbawn & Markethill (County-Armagh) last weekend (20th -21st August) the podium results and photo links…It was a cracker, so it was!!

The Brendan Campbell Memorial promoted by Drogheda Wheelers will be a cracker with the best of Ireland entered for tomorrow’s races (Sunday 26 July: 10 AM) The Entry list! The Belgian Project dedicated this report in the memory of Sean Lynch RIP