EX GRADUATES, EX-BURSARY HOLDERS, AND CURRENT ONES…HOW DO THEY FARE LATELY (PART 3) Jason Kenny (BP bursary holder 2022) and part of the very successful University cycling team UCD, who went to Belgium for some Elite z/c & U23 races (Top amateur kermesses with UCI 1.13 & 1.12 status) which include pro-team development teams!! Jason told me his story… 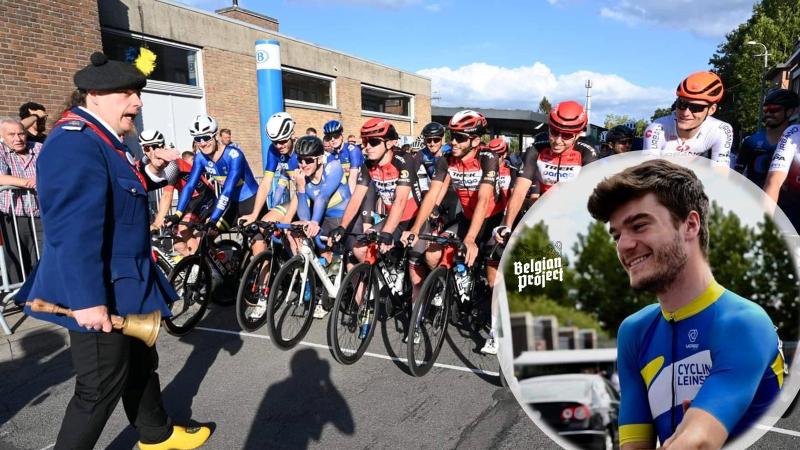 Report Jason, with my appreciation, and some photos from @Eddy Verhulst and Rita Thienpondt as indicated, others from Jason’s social media pages

With the support of The Belgian Project and UCD, I spent the last two weeks getting to grips with the elite Belgian kermesse scene. I was joined by fellow UCD riders Conor Murnane, Sean Landers, Jordan Luke, Rhys Kenny, and Gabby Glodenyte. While I spent some time there in 2018 as a junior, the senior races were a huge learning curve. The level wasn’t a surprise to us all, but knowing what it takes to compete and actually doing so are two very different things. Lining up for our first race in Lede I intended to just get stuck in and adapt to the different racing styles, rather than focusing on results. The relentless accelerations out of the seemingly endless corners were something I expected to take time to settle into. However, Murnane decided it was best to attack the first lap and form the winning break, from which in typical Murnane fashion, he would be forced out due to a mechanical. Jordan was the best of the team, finishing in the much-depleted bunch, with the rest of us being pulled at various stages.

Our second race, in Merelbeke, started almost identically, with Murnane making his way into the winning break early on. His exploits were again ended prematurely though, this time by a crash. Rhys and I managed to grovel our way to a bunch finish in what was essentially a 120km line out around the winding course.

Things would look up for us, albeit briefly, in the first round of a 3 day series in the town of Lokeren. Sean started things off by winning the first prime, while Rhys and Murnane made the first split in a crosswind section to finish in the prizes.
The second race in this series came with the bonus of 34° temperatures and cobbles. The heat ended all our races prematurely, Conor waiting until he was pulled out by paramedics, with heat stroke.
The third and final race in Lokeren saw Rhys make the front split again only to crash out with a few laps to go.
The prime specialist Sean added to his tally, while Conor was 5th in the bunch sprint behind the break.

I and Jordan headed to Kruisem for what was to be our last race, a 1.13 (U23) kermesse. I eventually managed to capitalise on some good legs, and after exhausting my long list of excuses in the previous races, managed to get into the break. What started out as a relatively large group would be whittled down in crosswinds before 2 riders rode away in the final stages. I managed to sprint to 3rd from the remains of the break to claim 5th overall, my best result of the trip.
Gabby was flying the UCD flag alone in the women’s races, although often with a large Irish contingent including Orla Walsh, Caoimhe O’Brien, and Jenny Neenan. These races had huge fields, often exceeding that of the men’s races, and packed with professional riders. Gabby did brilliantly finish in the bunch in most of her races, including the Heusdenkoers kermesse.
The two weeks were an eye opener to the sheer quantity of top-class riders in Belgium, with every race as hotly contested as an u16 neutral rollout. It was an incredible experience however and will be sure to stand us in good stead for the remainder of the domestic season.

Danish Champ Kasper Asgreen has given QuickStep the victory in the Tour of Flanders 2021, so did European Champ Annemiek Van Vleuten from the Movistar Women’s Team, exactly 10 years after her first win in De Ronde!!!

Vuelta-Stage 12: Hugh Carthy (EF1) hardest of the hardest on The steep slopes of the Angliru, Primoz Roglic showed cracks and let the jersey go to Richard Carapaz (Ineos). Dan Martin still in contention for a podium