The Belgian cycling world has lost one of its great champions today. Herman Vanspringel, nicknamed “Monsieur Bordeaux-Paris” died at the age of 79 after a long illness. 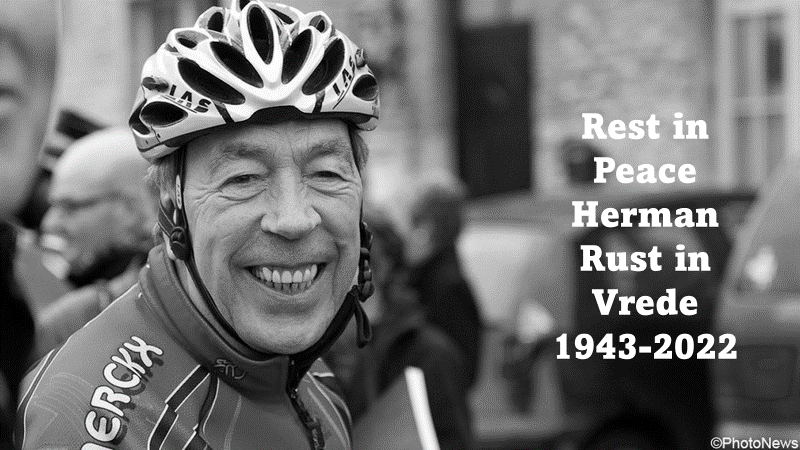 Report translated from the Sporza website, photos courtesy of @photoNews, @getty images, and Sporza, with thanks (bedankt)

I met Herman a few times in the seventies, he was one of my father’s favourite riders, the immense battles in the TDF with Jan Jansens (NL) in 1968 for example…A legend has gone…Rest in Peace Herman, and my condolences to his family and friends…

Herman Vanspringel, nicknamed Monsieur Bordeaux-Paris, died at the age of 79 after a long illness. Vanspringel won more than 130 races in his career, but a few races that he just missed are etched in the collective memory.
Herman Vanspringel, a sober farmer’s son from the Kempen, only discovered his racing talent in his late teens. In the mid-1960s he made his debut in the professional peloton, where he quickly impressed with, among other things, a win in Gent-Wevelgem and 3rd place in Milan-Sanremo in 1966.
Vanspringel was a gifted speed rider, but on his biggest date with the Chrono, he fell through the ice. In the Tour of 1968, he started as a leader in the final time trial with a lead of 16 seconds over Jan Janssen.
Still, the overall victory went to the Dutchman, who took advantage of a breakdown of Vanspringel. The difference, in the end, was 38 seconds. In the Tour Vanspringel eventually finished 4 times in the top 10, in 1973 he was allowed to take home the green jersey as a non-sprinter. In his career, he won 5 stages in the Tour de France.

Impressive honors list with 136 victories as a pro!!
In addition to his 2nd place in the 1968 Tour, Herman Vanspringel also finished 3rd in the Vuelta (1970) and 2nd in the Giro (1971), but he achieved his great triumphs mainly in the one-day work. In his 17 years as a professional, he won no less than 136 races.
He triumphed in Gent-Wevelgem (1966), the Tour of Lombardy (1968), the Omloop Het Volk (1968), Paris-Tours (1969), the Brabantse Pijl (1970, 1974), the E3-Prijs ( 1974) and the Belgian Championship (1971) in Martelange.
Just like in the grand tours, Vanspringel also won places of honor in the one-day races, often competing against Eddy Merckx. He was 2nd twice in Paris-Roubaix and he also collected numerous podium places in the Amstel Gold Race, Liège-Bastogne-Liège, the Tour of Lombardy and the Brabantse Pijl. He also had to make peace with silver at the 1968 World Cup, after the Italian Adorni.
Monsieur Bordeaux-Paris
Herman Vanspringel seemed to have a patent on places of honour, except in “his” Bordeaux-Paris, the now defunct race to which he owed his nickname.
In the monstrous journey from Bordeaux to Paris – more than 600 kilometers – part was driven at night and part behind the derny. This unusual combination turned out to be right up the alley of tempo bully Vanspringel, who won the race no less than 7 times.
In the early 1980s, after a very successful career, he hung up his bicycle. Vanspringel became a salesman and even after his professional career he was often on his bike for a ride.
In May, Monsieur Bordeaux-Paris was honored in his hometown of Grobbendonk, where a bust of him was unveiled. A very emotional moment for the ever affable Vanspringel, who turned 79 2 weeks ago. The finale of the *Big Red Cloud League* and *The Leinster CX League* at the Mc Crystal Cycling Track in Jenkinstown (Co-Louth) on the first day of 2022…After what I have seen, we are in for a treat in Armagh next weekend!!