Newport’s International junior, and 2022 BP bursary holder Niall Mc Loughlin (Covey Wheelers Westport Cycling Club) sent us the story of his adventures with the Irish Team, and guest riding for “Team Backstedt” in the Flanders…Niall certainly will be a force to reckon with in the coming years…we wish the “Mayo Bullet” all the luck in the world!! 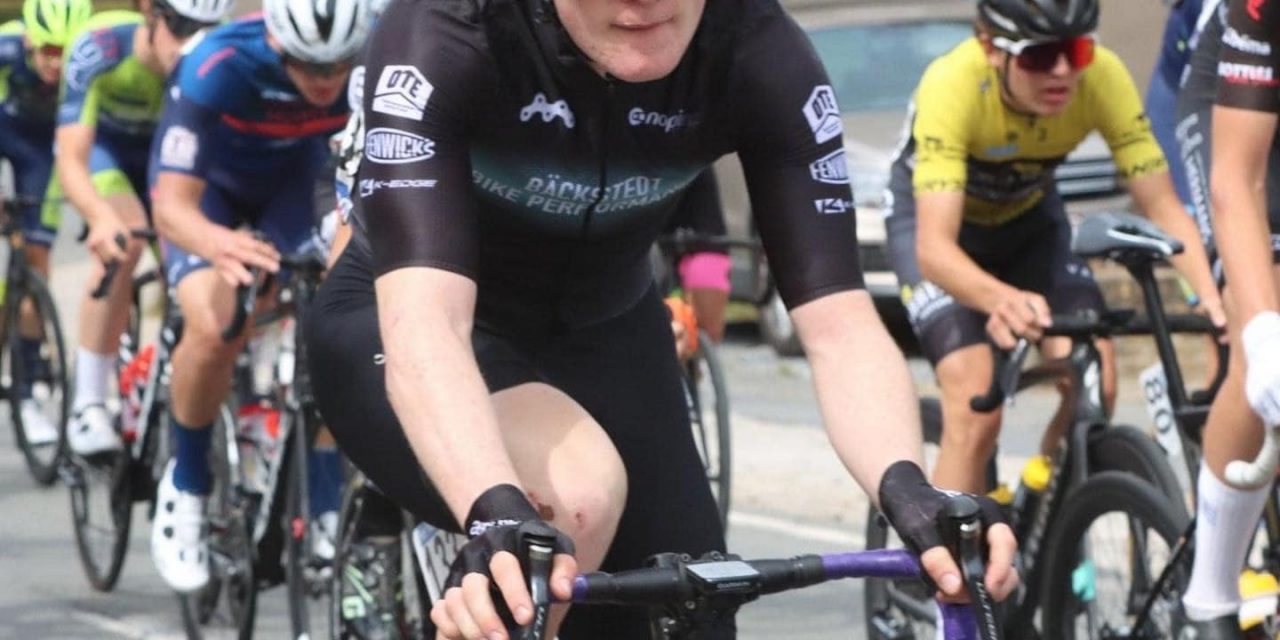 Foreword Dany: I met Niall for the first time at the National CX in Enniscrone-Sligo in 2020, just before Covid took over our lives, he impressed me with his performance that day with the U16’s, and since then followed him a bit closer. When this year I was working for the Kerry group Ras Mumhan as MC, he got my attention again, winning one stage and feared by the elite riders around him, his sprinting making a mark on the event…it was then I decided to give him a helping hand with a travel bursary, just like the other bursary receivers he confirmed being worthy of my selection!! (Photos courtesy of UEC, Feature photo, Martine Verfaillie in Belgium, Caroline Kerley last photo)

It was a pretty hectic few weeks over the summer, coming back from an appendix operation in may it was pretty tough to beat myself back into shape in time for the major races I had planned for the year. My first major race back in the summer was the national road championships in Kanturk where I placed second to a brilliant Oisin Ferrity. It was a tough day out with plenty of aggressive racing shown. The following weekend I raced the national senior omnium championships in preparation for the European track championships in Anadia Portugal, my best result on the day was second in the elimination race where JB showed his class ! I placed 4th overall on the day and learned lots for the weeks to come. It was D day the following Saturday where my big goal of the year European road championships would ascend on the roads of Portugal. On the day I finished in a reduced bunch in 44th place, a result that I felt didn’t represent what I had gone there to do but with temperatures of over 40 degrees it was in the hands of the gods. I refocused on the track which was kicking off the following week close by just outside Anadia. My first race of the week was the elimination race, the easiest way to describe it was carnage ! The race was restarted 3 times and yellow flagged twice, I managed a top 10 on the day by placing 9th. Unfortunately I had landed on the ground twice like the majority of the rest of the field and as a result of this the decision was taken that I would not ride the omnium the following day due to concussion. This was something I found very hard to stomach but a harsh reminder of the reality of this sport, there are ups and downs !

Following european championships I was determined to get back racing and travelled to Belgium with Backstedt Bike Performance where we competed in Trofee Van Vlandereen UCI 1.1. We claimed second with Dylan on the day and I rolled in 22nd after finishing my job for the day ! It was a great result for the team and it was brilliant to be back at the pointy end of things again ! I returned home to Ireland for a few weeks to train and prepare for my last big race of the year Keizer der Juniors UCI 2.1 in Belgium. Along the way I picked up a junior win in the final round of the national road series and was 7th elite on some character building Co.Down roads! This result moved me up to second overall in the series after missing two of the earlier rounds during my postoperative period. After a few more domestic races It was time to hit Belgium for the last race of the season, Keizer. The first stage was absolutely epic with the Paterberg, Tiegemberg and the Oude Kwaremont along the course. the race was flat out from the gun but everyone knew that the cobbled climbs would split the race, the split came on the Paterberg where around 30 of us distanced the rest of the field, myself Noah, Alex and Huw all made the split and rode hard to the finish, unfortunately our positioning was not what it should be in the final sprint and we all rolled in mid bunch hungry for the next day. The following morning it was a technical 6 km TT. Noah took 2nd on the stage and moved up into 3rd overall. We now had something to defend and try and win for the afternoon. I too was pleased with my time and power in the TT considering I was on a road bike. The final stage was an 100km kermesse around the narrow lanes of Koksijde. There was plenty of attacks and aggressive racing from the start and our plan was to keep the dangerous men in the group before launching our man solo in the hope of claiming back the 10 seconds we needed for the yellow jersey. With the fast nature of the course this did not happen but nonetheless great teamwork was displayed by all of us sitting on the front closing down moves all day. The hard work was rewarded when we took the stage win with Noah, a great end to the weekend. I again rolled in at 21st place. My main learning from the weekend was the importance of positioning in the final km. There is no moving up the outside with 500 to go! Overall it was a fabulous weekend and one that wouldn’t have been possible without the Backstedt support crew. I would like to thank Dany for the amazing work he has put in at the Belgian project and all the support he has shown. It is much appreciated!! Thanks, Niall.