A educated preview, and some predictions of the 2023 National CX Champs (Elite Men-Women-Junior Men) this Sunday (15th Jan) in Jenkinstown, Co-Louth, this by ex-national coach Andy Layhe (Precision Cycling Training) One thing is certain…it gonna be a cracker!! 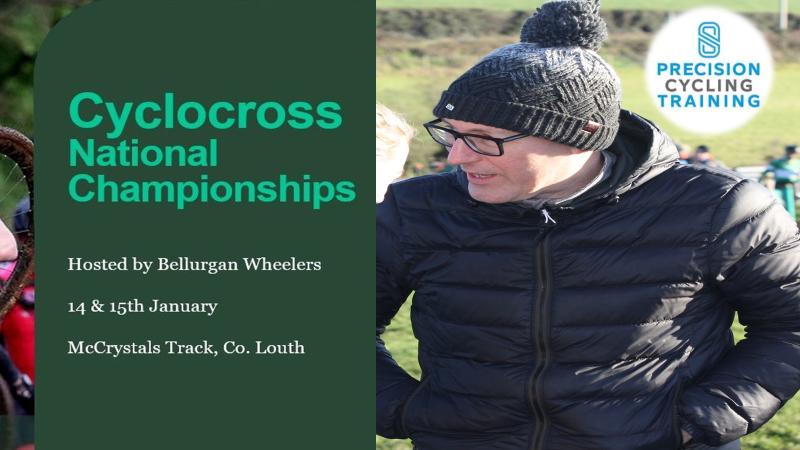 Overview, preview and predictions by Andy Layhe (with thanks for his contribution)
With the last two editions of the cyclocross nationals being more running based, this year we see a different proposition and exciting racing is guaranteed across all the categories and a relatively easier time for riders’ pit crews. Although McCrystals course can get muddy in sections, it does drain and dry out well.
The course favours the all rounder and sways towards those with good speed and road pedigree. That said, riders can lose or gain time in some of the technical sections, depending on what type of rider you are. Success will favour the brave who are willing to take some risks, and its looking like a very exciting weekend ahead. Different aspects of this course lend themselves to different skill sets of riders, the long straights, road style start/finish, hills, cambers, technical sections, steps – so you’ll find riders gaining or losing on certain sections then making it up on others which provides fantastic viewing for spectators. I feel the majority of the closer races will simply come down to tactics and an ability to minimise errors, but also by being brave and aggressive within certain sections of the course.

The junior mens event will be more open this year, Liam O’Brien stomped away in Armagh last year with Travis Harkness on his tail but I see it differently this year with some very strong lads coming up from U16 level to stake their claim for a podium place.
Liam has had a great season as we’d expect but I see this being a little closer than the 2022 edition.The course does favour Liam but the likes of Seth Dunwoody, Sam Coleman, Joseph Mullen, Curtis Neill and Adam Rafferty will surely be in the mix. Both Seth and Sam had good stints of racing over in Belgium at Christmas/New Year which could favour them.

A lot of these lads, although having less aggressive starts to their cyclocross campaigns, are essentially road focussed and with the increase in road training and intensity over recent weeks, are now in good shape. Joseph Mullen, from Navan, perhaps the most consistent on this course with several wins to his name here will hope to continue that in his first Junior national championships. At last week’s National Series in Portadown it was Seth who had a great last couple of laps to snatch a wonderful victory just ahead of Joseph. Portadown isn’t quite as technical as McCrystals though and I feel that those with the technical skills will be able to close down the gaps more quickly within those sections, which will make for a better race. In a really positive move, the organisers have moved the Junior event from its traditional early Sunday morning start time, to a later slot (12:25pm) and the young future stars will relish the opportunity to perform in front of bigger crowds. Gold: Liam O’Brien, Silver: Joseph Mullen and Bronze: Seth Dunwoody

Another great race on the cards and once again, this will be closer than previous editions. Many of the top contenders have raced the McCrystals course and have all had victories, so they know the course well and will have prepared as such.

Maria Larkin will be looking to defend her title and having travelled from her base in the USA, has spent the past few weeks mixing domestic events in Ireland with a solid stint of Belgium and World Cup/SuperPrestige events. Maria is always in good shape and her vast experience will count ten fold this coming weekend.
First year junior Aine Doherty has been somewhat of a revelation this season, with a UCI UK National Trophy podium and many elite victories to her name already. It can often take riders time to adapt to the elite events and the increased time but Aine has ticked all the boxes so will feature highly here no problem. The nationals can be different in that the pressures are a little more extreme there, but some riders also thrive on this. Aine has a great set up around her though and the vast experience of her father, Brendan, a former national CX champ and road race legend, will be a huge benefit.

Stephanie Roche has been consistent all season and taken some excellent results, particularly in the last third of the season, not to mention overall national series winner. Again, Stephanie knows this course inside out which will be a big advantage. Dark horse for me is Hannah McClorey who sits second Irish rider on the UCI rankings (behind Maria). Although based in England and still a junior, Hannah has previously won on this course in an elite event so knows what is expected. I was impressed with her ride that day as she was a only a first year junior. Hannah is clearly zoned in on this race having raced in Belgium over the Christmas period, racing the Sven Nys Grand Prix, Exact Cross Loenhout and the Superprestige in Zolder.
Another English based Irish rider is Roisin Lally. Again, Roisin was racing in Belgium this season and her experience and confidence builds year on year. A fantastic and well deserved nationals last season to finish 3rd, and Roisin will be praying for rain in the run up to the big day. I do see this mainly being a toe to toe between Aine and Maria. The title will come down to who has the resilience, stamina and the drive to pull on that national champions jersey. Potentially a fantastic race ahead, can’t wait for this one and “soooo” difficult to predict!! Gold: Aine Doherty, Silver Maria Larkin and bronze Hannah McClorey

Again, another potential cracker event with the men’s elite race. Another very difficult one to predict, but much like the junior predictions, I see the road based riders who have good technical ability dominating this one.
Dean Harvey goes in as clear favourite, and rightfully so, and what a fantastic season he’s had. Recently signing a contract with UCI team, Trinity Racing, Dean has nothing to prove and can go in fairly relaxed based on his unbeaten CX run this season. Everything is falling into place for Dean and its great to see, hard to believe he’s still only 19, way beyond his years.

A late comer to CX this season due to road commitments, Darren Rafferty, also with a UCI based team in Hagens Berman Axeon, Darren is hitting form just at the right time. With just a handful of CX races under his belt this season, it can be tricky for some riders to adjust to the bike and the technical areas of courses. However, Darren has pushed Dean to the limit these last two recent races. Dean was the winner on each occasion, by a handful of seconds (5secs and 20secs), but both riders will have benefited from those performances both mentally and physically.
Reigning champion Chris Dawson returns to defend his jersey and you can be sure he won’t relinquish it easily. Chris too, has raced this course before so isn’t going in blind. He’ll be hoping for heavier conditions and you can be certain he’ll put in a very strong race as he always does. My concern would be Chris’s lack of racing of late, but history has shown Chris is more than capable of winning races without too much racing or a full season of CX.

Several other riders will definitely feature. Last years second placed Sean Nolan has just completed a European race schedule. Still suffering back problems from the life threatening injuries he received last July, Sean has suffered recently and it’ll all be on the day for the popular Navan man. I expect Sean to be battling for the pointy end and his pedigree and local supporters will hopefully propel him.
Darnell Moore, another very talented rider and former elite CX champion has had a consistent season and this course has served him well in the past. A surprise entry but fantastic to see is that of JB Murphy, again a former junior CX champion but has dabbled with some CX races to good effect this season. Primarily track focussed, JB will still perform on the day and I see him being in better shape this weekend than he was just a few weeks ago. Dean Harvey’s team mate at Trinity is Kevin McCambridge, again some really solid rides this season. Kevin, building his road form, could also challenge for the podium. Gold: Dean Harvey, Silver: Darren Rafferty, Bronze: Chris Dawson This Sunday (26th Jan) BMX on the Belgian Project Media team’s menu with the Lisburn BMX Winter Series (rd 2) A rolling way to spend your Sunday!!

Cycling Ireland AGM + Award Night (23 rd Nov) and 2 CX’s this weekend at each side of the border on Sun 24th November.