One of our regular guest photographers at the BP media team is Anthony (Tony) Mairs, he helps us out whenever he can between a very busy training program and a very valuable asset to our volunteer media team. Lives near Drumbo County Down, works in architectural, property and product photography. Started cycling back in 2004 with Phoenix CC spending 10 seasons with the club.  Currently with East Tyrone Cycling Club since 2018. Tony is an accomplished Sprinter:  6x elite men’s Irish Champion – Sprint, Keirin, Kilometer, Team Sprint. 3x and current elite men’s Irish record holder in sprinting. Competes across Europe since 2017 in individual and Team Sprint.
Look out for him as a team rider in the soon to be released 2020 joint Belgium/Irish movie The Racer – IMDb based on the 1998 TDF alongside Louis Talpe and Matteo Simoni. His selection includes some pictures taken a few years ago…enjoy some of his work here below. The action feature photo has a wee story too (David Mc Veigh BP Media)…At the UCI Dublin Track GP 2016, a local youth charity had his flagship day at the Sundrive Velodrome, some face painting was part of activities and Tony had his face painted, but moments after he had to race in the Keirin final, and got a warning from the UCI comms…as you not allowed somehow to cover your face…it was all done in a humorous and understanding way…but rules are rules Tony…lol!! Thanks for taking the time out to participate in this series

Rest in Peace (Poupou) Raymond Poulidor passed away this morning in Saint-Léonard-de-Noblat, France after a short illness (15 April 1936-13 November 2019) 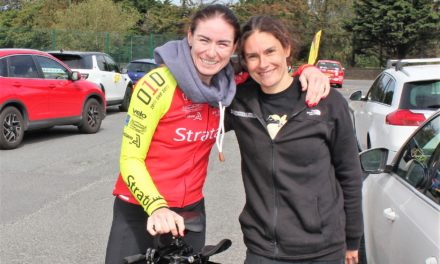 “You once, twice, three times as the song goes…Katie and Eve just have done it again!! Gold in the TT in Emmen(NL) at the Para-Cycling World champs (Thurs 12th September)