The promised change in operational matters of High Performance becomes real, as the new board of CI appoints Iain Dyer as High-Performance Director…he has the experience of 5 Olympic’s and coached the likes of Sir Chris Hoy and Jason Kenny, and was a big part of the huge success of the GB-Team in the last few decades, his previous employer!! “I say it’s the best CI High-Performance news of the decade!!” This I was told by a reliable friend in the Irish track world…here the story who appeared this morning on the CI website>>

Cycling Ireland is pleased to announce the appointment of Iain Dyer as its new High-Performance Director, effective immediately. In this role, Iain will take ownership of the operational delivery of the “Perform” elements of the Strategic Plan for Cycling Ireland, which will see the establishment of sustainable structures and systems in preparation for the 2024 Paris Olympic and Paralympic Games and beyond. Prior to his appointment, Iain spent 21 years at British Cycling where he was involved in five Olympic Games, including the Tokyo Games last July, where Britain topped the track medals table. In his first role as Sprint Coach, Iain was instrumental in the progression of riders such as Sir Chris Hoy, Victoria Pendleton, and Jason Kenny. In more recent years as Head Coach and Lead Track Coach, he was instrumental in developing the vision, structure, and environment of British Cycling.

Iain Dyer said:“I feel very honoured and excited to be appointed High-Performance Director for Cycling Ireland. I am looking forward to developing the performance pathway across all disciplines and helping riders and staff reach their potential on the world stage.”
Liam Collins, President, Cycling Ireland, said: “Iain’s breadth of knowledge across all disciplines of cycling from BMX freestyle to the more traditional areas of the sport is extremely impressive. Iain’s desire to build pathways across the sport, increase participation levels, and develop a coaching infrastructure that will be the backbone of the sport, as we build towards the future, is inspiring.” Matt McKerrow, CEO, Cycling Ireland, said: “It was apparent to the recruitment panel at any early juncture that Iain thoroughly understands the many interconnected elements of a cycling federation, and especially the role of high performance – not only in enabling athlete achievements that inspire the community; but in attracting future participants, coaches, volunteers, funders and stars to the sport. I’m delighted to have such an experienced operator with this wholistic vision and a real enthusiasm to realise the potential for Cycling Ireland joining the team”.

The appointment by Cycling Ireland follows last week’s announcement that Nicolas Roche has been appointed as Director Sportif for the Cycling Ireland Senior Road Program.

An emotional reaction from Michael Schär (AG2R-Citroen) after been disqualified for throwing a “bidon” towards some fans in the Ronde! Dear UCI: WHY KIDS START CYCLING! 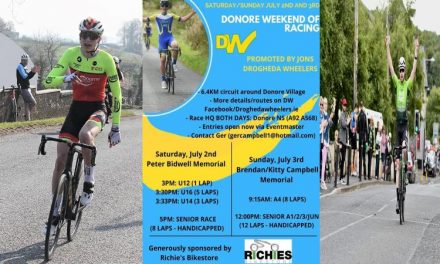