Archie Ryan (Jumbo-Visma Development Team) stays with the very successful Dutch team in 2023, this in his last year as Under 23, despite offers of 2 UCI world teams, the young Irish star made an educated right decision in my opinion to stay loyal, and bide his time!! Youri IJnsen from the Belgian cycling website “WielerFlits.be” reports… 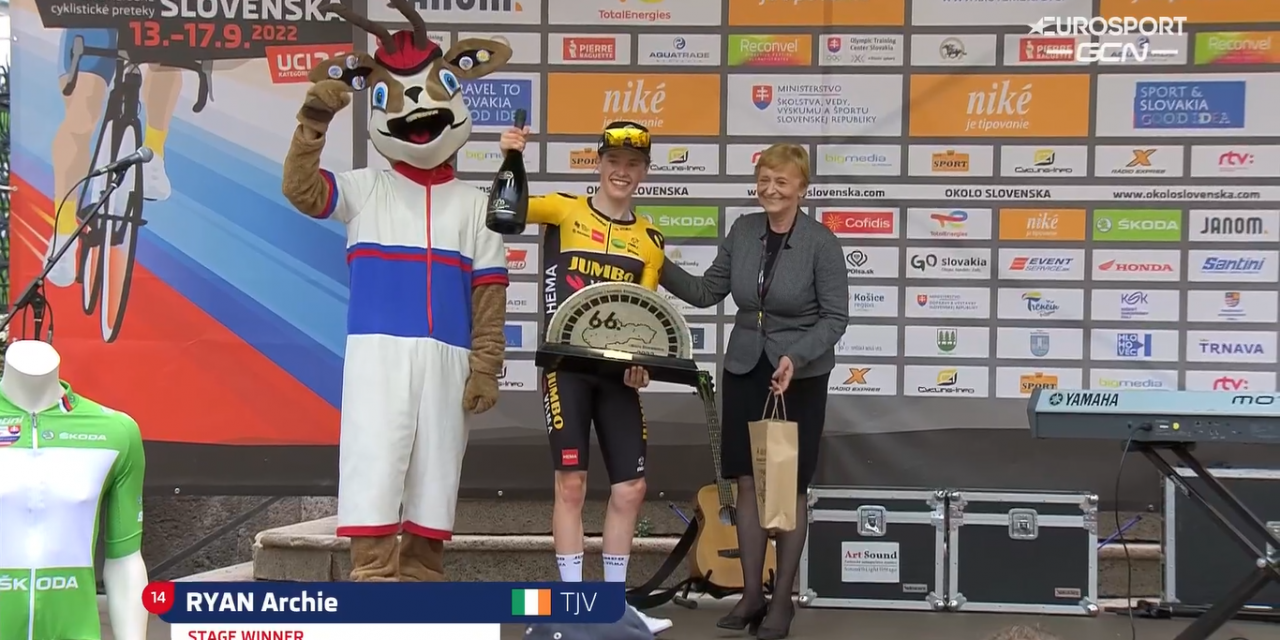 Translated from the original report on https://www.wielerflits.be/ “Archie Ryan is one of the late summer revelations. The 20-year-old climber from Ireland recently even recorded his first professional victory in the Tour of Slovakia and he won another mountain stage in the Ronde de l’Isard last weekend. That has not gone unnoticed by the professional teams. Reportedly, the youngster was able to sign with Trek-Segafredo and Team DSM, but he has rejected both proposals. He wants to become a professional at Jumbo-Visma.
Ryan has been driving for the Jumbo-Visma training team since its foundation in 2020. After a strong debut year in which he finished seventh in the Karkonosze Tour and then also seventh in the Ronde de l’Isard, things came to a head. He missed 2021 completely due to a knee injury, which he still suffered from at the beginning of 2022. In the meantime, his contract with Jumbo-Visma Development has been extended until the end of 2023. Ryan then took a big step in his development over the summer. In the service of Johannes Staune-Mittet he rode to sixth place in the Tour of the Czech Republic. He then finished fourth on behalf of Ireland in the final classification of the Tour of the Future, where he left his mark in the very tough final weekend. After overall winner Cian Uijtdebroeks, he finished second in the uphill finish at La Toussuire.
Ryan then went to the Tour of Slovakia with Jumbo-Visma’s main force. There he was the best of the pack in the second stage, where the finish was on a clinker-strewn slope. The Irish pocket climber competed with Mauri Vansevenant (Quick-Step-Alpha Vinyl) and Lorenzo Fortunato (EOLO-Kometa). Here too he finished sixth in the final standings and won the white youth jersey.

Those strong performances had not gone unnoticed by the professional teams. According to our sources, Trek-Segafredo and Team DSM were keen to hire him for 2023, but Ryan declined to do so. He dreams of making his professional debut at Jumbo-Visma, although the Dutch team cannot give any guarantees. As of 2024, Staune-Mittet, Per Strand Hagenes and Loe van Belle will already make the switch from the training team. In addition, Lars Boven is also developing well. He and Ryan are last year espoirs in 2023.
Last weekend, the Irish pocket climber again showed his business card in the French Pyrenees. In addition to his stage victory, he again guided team mate Staune-Mittet to the overall victory. Jumbo-Visma has also finalised their moves on the transfer market for next year (2023) No one will be added, so the team will start the new season with 29 riders.