I would like to dedicate my gallery to my dear friend, photographer and one of life’s gentlemen Jimmy Lavery who died last September (Jerry Rafferty)

So pleased that Jerome wanted to participate in my series of cycling photographers top 15, a great and true friend from County Armagh, we have spent weekends away from home covering major races in Ireland, and his story’s of Irish Cycling here a great resource for me. I am always grateful for his help when I am short of a few photos to do my reports, especially finish photos as I am mostly doing videos and hands short at times. His photos have something special, they come alive and tell you a story at the same time. Jerry told me: “ I fell in love with cycling when I was 13 years old and took part in both racing and touring until I was 16. Although I continued to maintain a very keen interest in the sport I didn’t race again until my early twenties until I was forced to retire due to health problems, though my love for the sport never waned. Regarding the photography, I continued getting cycling magazines such as Cycling Weekly and especially Miroir du Cyclisme, which I had posted to me from a little newsstand in Piccadilly, London. From those magazines, I developed an interest in cycling photography and have been taking the odd photo or two as health permits for around 15 years” Jerry has also his son Steffan racing for the Armagh City Cyclists (winning photo below) More of his work can be seen on https://fotozone.smugmug.com/ Please credit the author if using his photos on social media as a courtesy. Thanks so much, Jerry, a fantastic addition to the series…(feature photo David Mc Veigh BP Media)

Above: Valerio Zamboni from Monaco, interesting character. https://groox.com/en/portfolio/valerio-zamboni/
He owns a company that sells private jets, I took the shot during the Race around Ireland a few years ago. His business is described here…
https://500.spearswms.com/travel_posts/valerio-zamboni 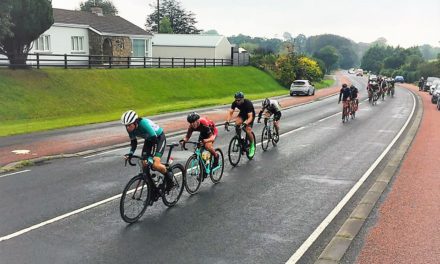 Sad news from Donegal! Due to the uncertainty of current times, and with safety in mind, the “Errigal International Youth Tour 2021” has been cancelled!! We at the project hopes that this top European Youth cycling event can return in full glory in 2022…