The “Ride for Raymond” fun cyclocross (In aid of the Air Ambulance NI Charity) was held yesterday (Sun 22nd Jan) at the Cyclocross-NI permanent venue in Portadown, and hosted by East Antrim CC, Raymond Beers (M60) had a life changing crash while training on the bike early 2022, and wanted to thank the Air Ambulance for probably saving his live!!! Thousands of pounds has been raised!! 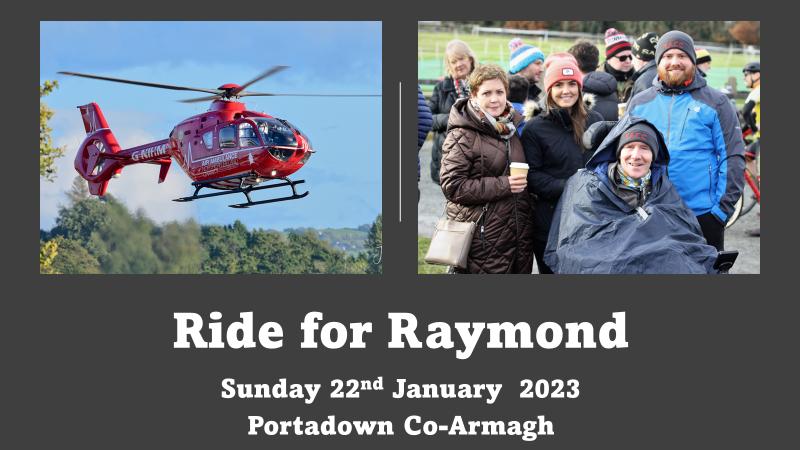 Foreword Dany: “The Irish Cycling Community keeps amazing me, yesterday in Portadown was another example of the caring nature of our cycling fraternity…Raymond wanted to raise some money for this Charity, this as a thank you for helping him on that dreadful day last year, and probably saved his life with a quick responds, and lift to the hospital. The amount raised by the raffle tickets was very high (will be announced when all things are counted up) All prizes donated by kind companies, pro riders contributions and so many more good souls! The atmosphere was electric, and the craic was just so heart warming! “

Ride for Raymie report (Martin Grimley)
On Sunday 22 January 2023 the Ride for Raymie was held at CyclocrossNI in Portadown. This charity event was a fundraiser for the Northern Ireland Air Ambulance Service. The Service does great work throughout the island but in particular they attended Raymond Beers, a long time cyclo-cross racer from the East Antrim cycling club. In early 2022 Raymond was involved in a serious accident while road cycling. Thanks to the Service, he was airlifted to hospital and received care for his injuries. Unfortunately Raymond was paralysed from his injuries but he was able to attend today’s race. Raymond’s last race was the Ulster championships back in December 2021 where he finished in second place. Today he attracted a crowd of people wanting to talk to him.

East Antrim cycling club had decided to host this event, spearheaded by the popular pit commissaire Jim Adams, to help Raymond give something back to the Air Ambulance Service. Through the publicity this fundraiser attracted a huge amount of online donations as well as a plethora of cycling related items which were donated for a ballot from lots of wonderful individuals, shops and companies. The race itself saw 100 riders registered with races from Under 6s up to adults. As part of the fun event there was a running race where competitors had to carry their bike from the start to the top of the hill, cycle down to the pit area, then carry their bikes to the finish line. There was lots of smiles and laughter in this race, despite it being a lot harder than the competitors had anticipated!!

The course was fairly muddy after the recent snow, however race day saw mild conditions and no rain. The start of the day was for the Under 6s with 4 riders taking on 2 short loops. They all received a goodie bag at the finish line.The Under 8s had 4 laps of their course to complete. Conor McGahan (Square Wheels) took the win in the boys’ race with Jack Corey (Apollo Cycling Team) second, Thomas Crymble (Lisburn BMX Club) third and Ewan Corey (Apollo Cycling Team) fourth. Ríonach Campbell (Square Wheels) beat Eabha Connolly (Square Wheels) in the girls’ race.

The Under 10s had 5 laps of their course to complete. In a change from normal races, the girls were started in front of the boys. Aoife Campbell (Square Wheels) got to work straight away and no one could catch her. Fiadh Craig (VC Glendale) was second with Erin Corey (Apollo Cycling Team) third. Jack McGahan (Square Wheels) won the boys’ race with Jake McKee (VC Glendale) finishing second and Leo Gallagher (Shelbourne/Orchard CC) taking third place.

The running race took place at 11:30 with Darius Buchowicz crossing the line first.

At 12:30 the rest of the race categories lined up. As this was a fun event, some carefully selected adult riders were given a “slight” head start on the main bunch. In the men’s race there were a few of the top Under 14 and Under 16 riders mixing it up with the adults. There were separate races for the Under 14s, Under 16s and women.

In the women’s race Stephanie Roche (Scott Bright Motor Group) was unchallenged for the win after Elena Wallace (Harps CC) dropped out due to a mechanical. Wendy McKeegan finished second in her first ever cyclo-cross race.

In the men’s race there was a great battle at the front between Espoir rider Lee Harvey (Spellman-Dublin Port) and the Under 16 national champion Conor Murphy (Rostrevor Mountain Bike Club). At the finish it was Lee who took the win with Conor second. A mix up in the results (due to a missing race number) denied Curtis McKee (Scott Bright Motor Group) the podium photograph but he did finish third. Aaron Parks (Banbridge CC) who did wear his race number, did get onto the podium but was actually 4th. Graham Boyd (McConvey Cycles) was fifth with Barry Convery (Newry Wheelers CC) sixth, site owner James Wilson (Velocity Road Club) was 7th with national M60 champion Johnny McCabe (Cuchulainn CC) finishing 8th.

After the podium presentations, the ballot took place.

Many thanks to Jim Adams and all the volunteers from East Antrim CC for hosting the race. This concludes the 2022-2023 Ulster cyclo-cross season. Commissaires: Liz Roche (trainee) and Martin Grimley

Full results can be found on https://ulstercyclocross.com/wp/wp-content/uploads/2023/01/Ride_for_Raymie_Results.htm

“There is one more cyclo-cross race in Ireland and that is at the McCrystal site in County Louth – the Sean Sharkey Memorial Race, which takes place on Saturday 28 January 2023. Entry details on https://eventmaster.ie/event/0jkwtzqsA1
Together we will celebrate the life of Sean Sharkey with all proceeds going to The Maria Goretti Foundation.
Race schedule will be published on Thursday.
See you all there, Martin Grimley” You once…twice…three times a “silver lady” as Lionel Richie would sing Lara Gillespie..you did it again!

A new MTB event in County Down is born…” The XC Winter Classic 2021″ promoted by Ards Cycling Club, will be held on Sunday 5th December at the Whitespots Trials Park (Somme Centre Newtownards)